Last week we went to the cinema intending to use our free ticket voucher from Sainsbury’s to see Miss Peregrine.  According to both the website and the interactive noticeboard at the cinema there were seats but the dead eyed staffer said it was sold out. Normally we would have just said sod it and gone to Nandos. But the voucher was due to expire so we went to see The Magnificent Seven instead.

I grew up with a father who loved sci fi and cowboy films. I remember watching the original version with Yul Brynner  (who will forever be the King of Siam to me, however inaccurate that film was) and indeed watching the Seven Samurai aka the original of the original. 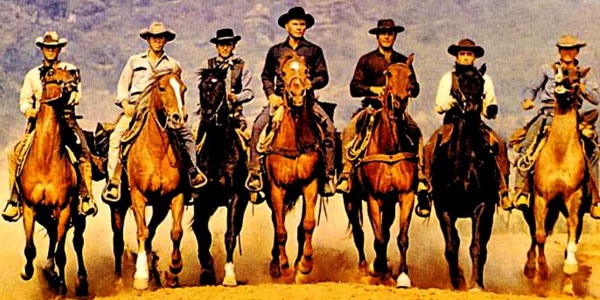 So I wasn’t sure I’d enjoy this, but Chris Pratt was in it and I find him amusing and for six seconds the very pretty Matt Bomer was as well.

I have a whole theory about Chris Pratt and his mission to recreate Toy Story by himself – he’s played Andy (Parks & Rec), a spaceman (Guardians of the Galaxy), run with dinosaurs, because unless you’re Andy Serkis you can’t be a dinosaur  (Jurassic World) and now a cowboy. Next up Bo Peep, a slinky dog or a pig (remake of Babe maybe).

Anyway. Onto the title of this post. There may be spoilers ahead so read on only if you don’t care.

The plot centres around a small frontier town in California during the Gold Rush, where a wealthy and ruthless man plans to drive the locals out to dig more mines. Matt Bomer dies in a shootout and the church is burned down.

Matt’s widow (Haley Bennett) decides to find someone to help her town and sets off with human puppy dog in tow.

She finds Denzel Washington, a bound sheriff doing his duty, interestingly dressed all in black, counter to most cowboy films where the heroes wear white hats (something much referenced in Buffy the Vampire Slayer).

He recruits gambling sharpshooter Faraday (Pratt) and sets out gathering a posse.

There are seven men, one woman and the aforementioned human puppy. No one assaults her, no one even intimates rape. Not even the Mexican or Native American. (Trump would dislike that).

After a rather explosive shootout with the bad guys – most of the seven and many of the townsfolk are dead. The villain gets his comeuppance and is shot by the heroine.

The three heroes who ride out of town are a black man, a Mexican and a Native American – hardly Trump’s fan base. The four buried in town include the son of Irish immigrants (Faraday), a Chinese man (himself an immigrant), a crazy mountain man who spouts the Bible – in a good way, and a Cajun from New Orleans who again would be descended from immigrants.

They stood up and defended strangers against a wicked man only concerned with his own wealth and power.

I think Hollywood just allied itself even more firmly with Hilary Clinton. The true hero is a woman who united people, who found the best people for the job, regardless of their background or ethnicity.

While Clinton is far from perfect (she is human) I think she’d probably enjoy the film a damn sight more than Trump. I just really hope the Americans can see that Trump is not President material.