A smart and gripping tale of conspiracy, murder and espionage in Elizabethan London, ideal for fans of CJ Sansom, Rory Clements and SG MacLean.

Treason sleeps for no man…

London, 1591. Nicholas Shelby, physician and reluctant spy, returns to his old haunts on London’s lawless Bankside. But, when the queen’s spymaster Robert Cecil asks him to investigate the dubious practices of a mysterious doctor from Switzerland, Nicholas is soon embroiled in a conspiracy that threatens not just the life of an innocent young patient, but the overthrow of Queen Elizabeth herself.

With fellow healer and mistress of the Jackdaw tavern, Bianca Merton, again at his side, Nicholas is drawn into a dangerous world of zealots, charlatans and fanatics. As their own lives become increasingly at risk, they find themselves confronting the greatest treason of all: the spectre of a bloody war between the faiths…

S. W. Perry was a journalist and broadcaster before retraining as an airline pilot. He lives in Worcestershire with his wife.

My thoughts: I do love a historical crime novel, it combines a lot of my favourite, deeply nerdy things. And Kit Marlowe pops up in this one.

Do read the first book, The Angel’s Mark, first. It helps situate the characters and the backstory so The Serpent’s Mark can just get on with the cracking plot rather than explain who everyone is, especially if English history isn’t one of the things you know a bit about.

I really enjoyed this (if you’re not sure how I feel). It was fun, gripping, clever and felt just as though S.W. Perry had been skulking around the back of the Jackdaw making notes on the sort of real life schemes that happened in the period. 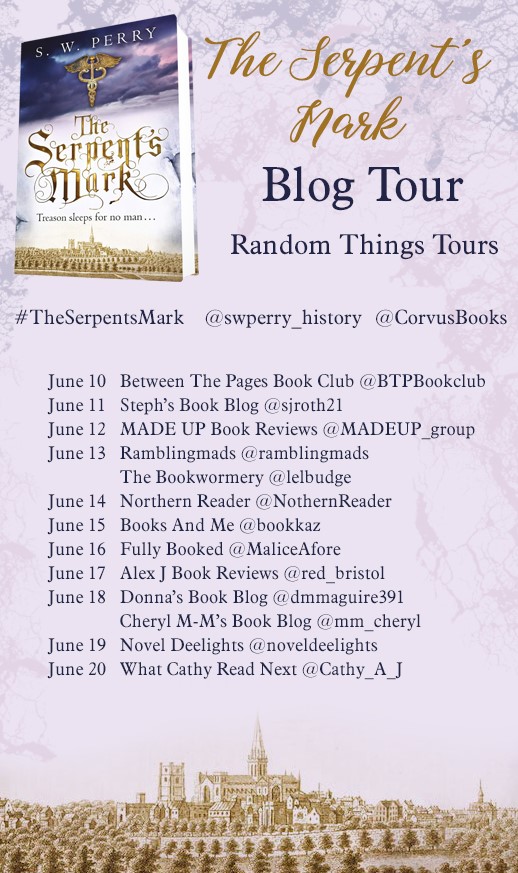 Check out the rest of the tour.

*I was gifted a copy of this book (and its predecessor) for review but all opinions remain my own.