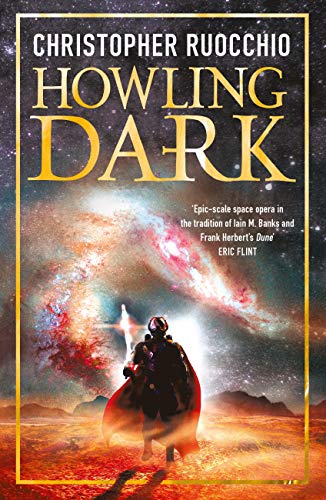 Following on from the first volume of the Sun Eater Sequence (Empire of Silence – I suggest reading it first so this one makes more sense), Howling Dark finds Hadrian Marlowe travelling through space with his ragtag band of fake mercenaries, the Crimson Company, having entangled himself with the Sollan Empire again.

He is on a quest for the lost planet of Vorgossos, a place of myth, hoping it holds the keys to resolving the conflict with the Ceilcin – an alien race determined to destroy anyone who stands in their way.

Hadrian, being Hadrian, doesn’t exactly go about this in a calm and rational manner, all sorts of chaos and carnage ensue, as Hadrian and his friends ricochet around the far reaches of the galaxy following leads, both useful and not, trying to be a diplomat and not always succeeding.

I loved Empire of Silence and couldn’t wait to get stuck into this chunky boi. Hadrian is a brilliant protagonist, eminently flawed and prone to acting like an idiot, despite his previous experiences. There were fewer new locations than book one, as he bounces around following leads, but the world building (or galaxy building) is strong and while I can’t quite picture the creepy Ceilcin, I see them as a bit like the alien in Alien, but creepier.

The ending twists and turns, and I am not remotely sure what will happen next!

*This book was kindly gifted to me by the publisher with no requirement to review but as I enjoyed it, I thought I’d share!