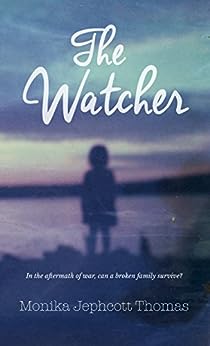 It’s 1949 when Netta’s father Max is released from a Siberian POW camp and returns to his home in occupied Germany. But he is not the man the little girl is expecting – the brave, handsome doctor her mother Erika told her stories of. Erika too struggles to reconcile this withdrawn, volatile figure with the husband she knew and loved before, and, as she strives to break through the wall Max has built around himself, Netta is both frightened and jealous of this interloper in the previously cosy household she shared with her mother and doting grandparents. Now, if family life isn’t tough enough, it is about to get even tougher, when a murder sparks a police investigation, which begins to unearth dark secrets they all hoped had been forgotten.

This started slowly but once things began to happen and you learnt about the characters it picked up. It was really interesting to see the German side of the post-conflict history I learnt about at school. As well as the trauma of his experience, there is also a national period of reconciliation going on around Max after he returns from the Siberian POW camp, and attempts to readjust to his life, family and role.

Max was a non-combatant, being a doctor, but was still treated incredibly poorly by the Russian soldiers who haunt his nightmares. His family, including his wife and the daughter who has never met him before, also have to adjust to their new family dynamic, and Max’s PTSD, which leaves him with horrific night terrors and cut off from his loved ones.

I know a little about Allied soldiers returning from WWII but very little is said about life in occupied West Germany, and what support, or lack thereof, there was for the men returning to their lives.

Tragedy strikes the family, first with the murder and then in more intimate ways, even closer to home. The police detective is not a pleasant man and makes the family afraid.

It was also interesting to have Netta’s perspective as the children are often forgotten in stories like these, how strange it is to have someone you’re told is your father, but who is actually a total stranger, come to live with you and disrupt your life.

This book is well written and moving, capturing a picture of the period and the characters with a compassion and understanding that is often lacking in historical recollections of post-war Germany.

*I was kindly gifted a copy of this book in exchange for helping Clink Street publishers to celebrate their authors and books.