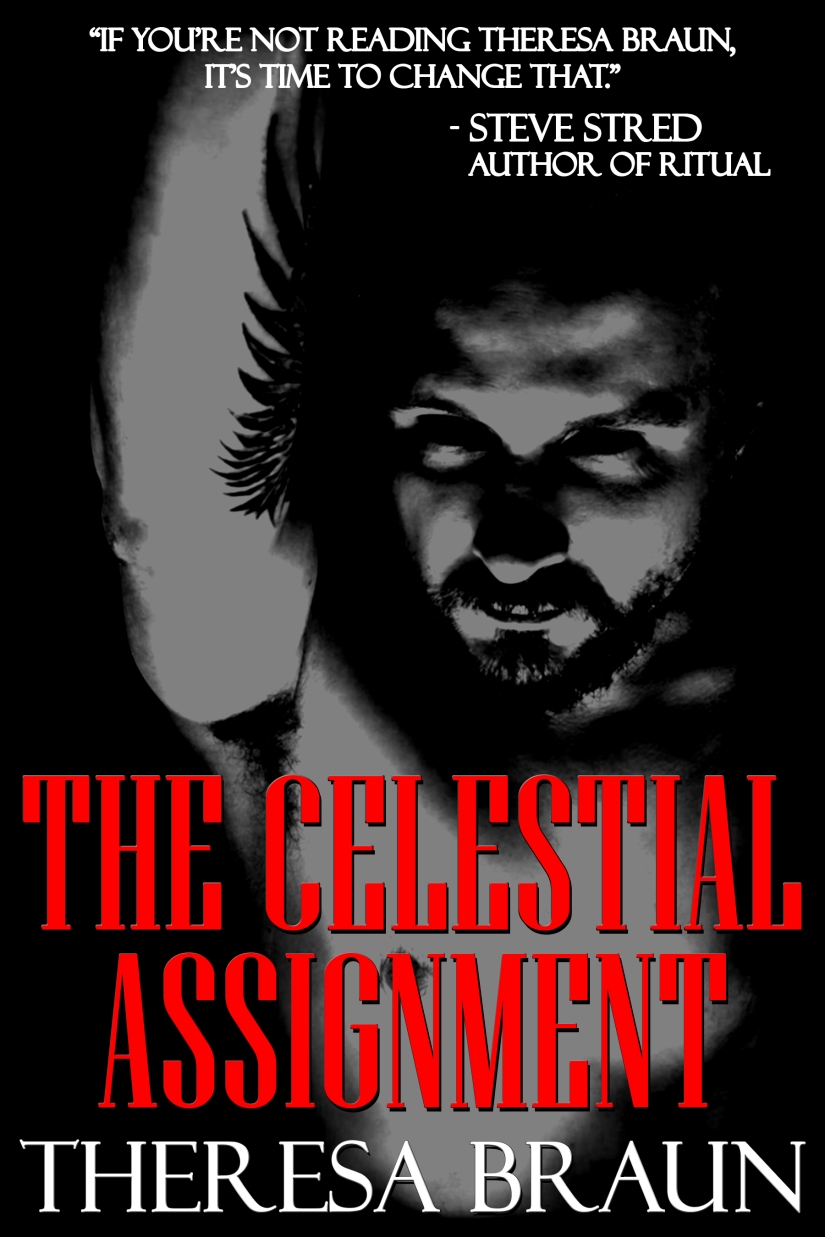 Theresa Braun has a new short story coming out called, The Celestial Assignment. Here’s a sneak peek at the cover, and an excerpt from the book.

After a sudden death, Will, a misguided angel, is tasked with protecting a baby girl. Watching over her as she grows up and navigates the world appears a harsh punishment for his past failings. Can he redeem himself, or will he fall further from grace?

“I devoured this phenomenal sorrow-filled piece in one sitting, but Braun left me with so many questions I had to think about. She creates a world that’s vivid, lush and visceral, while setting the reader up for heartbreak and despair. Amazing read, can’t recommend ‘The Celestial Assignment’ enough.” –Steve Stred, author of Ritual

Hmmm. What’s this? Looks like Ms. Braun left her computer on and her Goodreads bio open.

This should be fun.

What can we say about Theresa? I mean other than the fact that she’s weirdly obsessed with smiley faces :-). Like, seriously obsessed >:-*. It’s kinda scary :-O.

I think she thinks she’s from Renaissance England or Venice or something. I never could figure out which one it was. (She’s really bad at doing accents.)

She likes romance novels and crime TV, which are pretty much the same thing when you think about it. Ha! Am I right?

She has a hell of a singing voice. Seriously. It’s, like, seventh circle of hell bad.

She likes editing. A lot. Just wait till she gets a load a this.

Cats. Shoes. Chips and salsa. In that order.

Yeah, that last part didn’t make sense to me either.

You know that meme of the angel statue, its face in its hands, with the caption: “This is probably what my guardian angel looks like”? Well, that’s the only thing on the wall in this stark room meant for some 12-step spiritual garbage.

I was mystified as fuck the first time I sat here. The last thing I’d remembered was having a beer with one of my side pieces before witnessing her chuck my body into an unmarked grave. The bitch walked right through me as I grilled her about what she’d done.

Next thing I know, I transported into this very chair. Looking around the circle, I noted everyone’s arms tattooed with wings in shades matching their clothing.

“What am I doing here?” I asked, studying the new gray markings growing iridescent on my skin.

“You’re getting a new assignment,” said someone with platinum hair. His wings were the real deal, tucked at his back, and he wore a white T-shirt and white jeans.

“As opposed to what?”

“Going back to earth. That hasn’t been working.” He stared at me with his unnaturally light blue eyes. “Don’t worry, there’s a manual under your seat.”

That’s when I zoned out. The rest of them yammered on as I frantically retraced my memory for clues to why I was here. What kind of demented lunatic would make me an angel, if that’s what I was? I hadn’t even stepped one foot in a church, at least in my most recent life. That’s when it hit me I’d had more than one incarnation on earth. The mere vocabulary of it made me shiver.

With a jolt, my feet landed on slick linoleum, the burning odor of disinfectant and stale medicine in the air. A woman screamed in a hospital bed, her legs pried open with a sheet over them. Ugh. I’d never liked babies and had zero fatherly instincts. As the infant cried and was handed to the mother, the dad busy snapping Polaroids, I heard a whisper: “She’s your responsibility now.”

As my questions flooded in, that damned manual appeared in my hand. Annoyed the heavenly head honchos hadn’t downloaded the content into my brain, I held onto it, lest I be struck by lightning.

“Hello, Celeste,” the mother cooed to the baby.

I tapped my foot.

The irony of the name irked the shit out of me.

As a reluctant guardian angel, I figured my job involved keeping this pipsqueak’s hand off the hot stove, and her mouth away from poisons in the cabinets. Most of the time, I yawned in the periphery, especially since I was trapped in this fucking hick town somewhere in the middle of Wisconsin. Countless Crayon doodles and finger paintings were the extent of my excitement. Eventually, I rejoiced when of a few close calls at the wheel of her parents’ car gave me something to do. But then there was her painfully awkward discovery of boys. Once she inadvertently brushed this dude’s junk at a dance. Her first kiss was lame as shit. It was like being tuned into the Nickelodeon Channel. Her interactions with a new boy made me gag—they’d finish each other’s sentences and giggle like idiots. What did I do to deserve this?