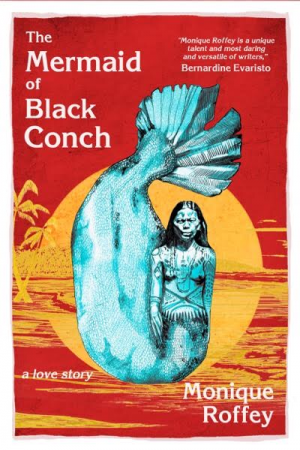 April 1976: St Constance, a tiny Caribbean village on the island of Black Conch, at the start of the rainy season. A fisherman sings to himself in his pirogue, waiting for a catch – but attracts a sea-dweller he doesn’t expect. Aycayia, a beautiful young woman cursed by jealous wives to live as a mermaid, has been swimming the Caribbean Sea for centuries. And she is entranced by this man David and his song.

This was a really interesting folktale set in the modern age, where a mermaid falls for a fisherman, who unfortunately decides to take her from the sea.

Others lay claim and she yearns for her watery home.

Akin to the stories of other ocean dwellers trapped on land, like selkies, and indeed other mermaids, the existence of such a beautiful creature stirs desire and greed in the hearts of many and places these mythical beings in peril.

Roffey writes with confidence and assurance – as befits an accomplished writer.

Written in Trinidadian dialect, the cadences of people’s speech really adds to the sense of place and gives it an authenticity and character all of it’s own.

I was kindly sent a copy of this book by the publisher with no obligation to review.