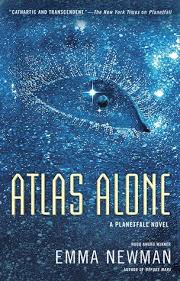 Six months after she left, Dee is struggling to manage her rage toward the people who ordered the nuclear strike that destroyed Earth. She’s trying to find those responsible, but she’s not getting very far alone.

A dedicated gamer, Dee is endeavoring to discover a mersive good enough to enable her to escape her trauma. When she is approached by a designer who asks her to play test his new game, she hopes it will be what she needs—but it isn’t like any mersive she’s played before. When a man suddenly dies in the real world, she realizes that at the same time in the game, she killed a character who bears a striking resemblance to the dead man—a man she discovers was one of those responsible for the death of millions on Earth.

Disturbed, but thinking it must be a coincidence, Dee continues the hunt for information. But when she finds out the plans for the future colony, she realizes that to save what is left of humanity, she might have to do something that risks what remains of her own.

I love this series of interconnected books set in the same universe following the mysterious Pathfinder across the galaxy to a new world after Earth is destroyed.

Dee is an unreliable narrator, but the only one we have, and so as she investigates those onboard the colony ship, we learn as much as she is willing to share.

This makes the plot more intriguing and Dee a fascinating character, the twist at the end I did not see coming, making it all the more delicious.

Newman is a very skilled writer, and very nice too (I met her at last year’s Gollanczfest), and this demonstrates her world building skills, setting much of the novel inside Dee’s mind as she plays an immersive VR game, which takes skill.

Highly enjoyable and smart, I just need to read the rest of the series soon.

I was kindly gifted a copy of this book by the publisher with no obligation to review.