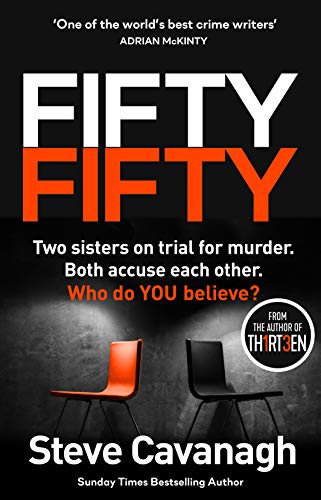 Alexandra Avellino has just found her father’s mutilated body, and needs the police right away. She believes her sister killed him, and that she is still in the house with a knife.

Sofia Avellino has just found her father’s mutilated body and needs the police right away. She believes her sister, Alexandra did it, and that she is still in the house, locked in the bathroom.

Both women are to go on trial at the same time. A joint trial in front of one jury.

But one of these women is lying. One of them is a murderer. Sitting in a jail cell, about to go on trial with her sister for murder, you might think that this is the last place she expected to be.

The Eddie Flynn books are very popular in my house and so there was a little unseemly squabbling about who got to read this first.

The plot is so clever, the twist at the end I couldn’t even see coming, and I’m pretty good at spotting them.

Cavanagh is an excellent writer at the top of his game and knows how to deliver a clever, witty plot and play with his readers’ brains in the process.

I was kindly sent a copy of this book with no obligation to review.