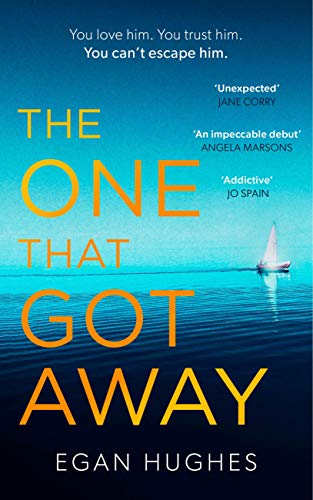 You love him. You trust him. You can’t escape him.

Mia thinks she has escaped her controlling ex-husband, Rob. She’s found herself a new home, a new boyfriend and a new life.
But when the police arrive to tell her that Rob has been found dead on his boat, things quickly fall apart. Mia is terrified she’ll be suspected, however the police are keeping all options open. They know Mia had reason to hate her ex-husband, but she’s not the only one. Plenty of people wanted Rob Creavy dead, not least his new wife, Rachel.
What they don’t know is that Mia has a secret, one she’s desperate to protect.

But someone else knows. Someone with very dark secrets of their own . . .

Coercive control or gaslighting is in the news a lot more recently, an insidious form of abuse that can be more easily hidden than the marks of physical violence. Rob is a skilled manipulator and con man. Mia, Rachel and plenty of other women suffered at his hands. So clearly there are people who want him dead.

The plot twists and turns, flashing back to Mia’s turbulent marriage and to the present and the investigation into Rob’s death.

Lots of red herrings pop up, little plot cul de sacs that trick the reader into going “a-ha!” incorrectly. Mia makes some of the same errors.

The sting at the end, after the case appears to be solved is very clever and makes you reconsider some of the characters and their actions.

A very enjoyable and clever thriller.