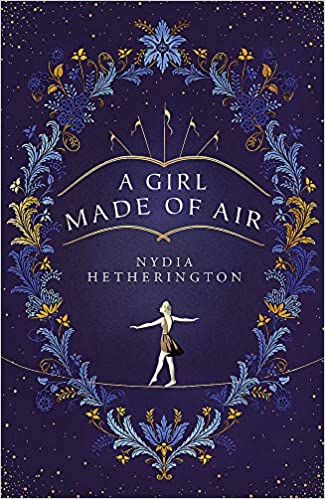 A lyrical and extraordinary debut packed with myth, magic, and folklore. An atmospheric homage to the strange and extraordinary, perfect for fans of Angela Carter, Bridget Collins and Stacey Halls.

This is the story of The Greatest Funambulist Who Ever Lived…

Born into a post-war circus family, our nameless star was unwanted and forgotten, abandoned in the shadows of the big top. Until the bright light of Serendipity Wilson threw her into focus.

Now an adult, haunted by an incident in which a child was lost from the circus, our narrator, a tightrope artiste, weaves together her spellbinding tales of circus legends, earthy magic and folklore, all in the hope of finding the child…

But will her story be enough to bring the pair together?

Originally from Leeds, Nydia Hetherington moved to London in her twenties to embark on an acting career. Later she moved to Paris where she studied at the Jacques Lecoq theatre school before creating her own theatre company. When she returned to London, she completed a creative writing degree at Birkbeck. Nydia is based in London.

I have always been fascinated by stories set in circuses, I blame it entirely on Disney’s Dumbo animated film and Angela Carter’s Nights at the Circus, and there is definitely an element of Fevvers in the protagonist of this story. And not just because they both happen to be funambulists.

The Girl is abandoned by her mother, raised amongst the greasepaint and animal enclosures of a slightly sad fading British travelling circus.

Taken on by the mysterious Serendipity Wilson and taught to walk the high wire, she’s drawn into a world of Manx fairy tales and leotards, that all of a sudden come tumbling down.

She then heads on a journey of redemption to New York’s famous Coney Island. Her story unravels in a confessional letter to the young journalist who came to interview her.

Underneath the glitter and bright lights reality is harsher and sadder than it seems. Everyone has a story of their own and The Girl sees glimpses of them but caught up in her own tales, she doesn’t see the hurt that is hidden within.

I loved the dark, Gothic blend of glory on the wire and tragedy at ground level, the way others stories opened into hers, like Matryoshka stacking dolls.