Happy publication day, and congratulations to author Chris Jayne on the release of Minute Zero (Stronghold #1)!

Read on for an exclusive excerpt and a chance to win a $10 Amazon gift card! 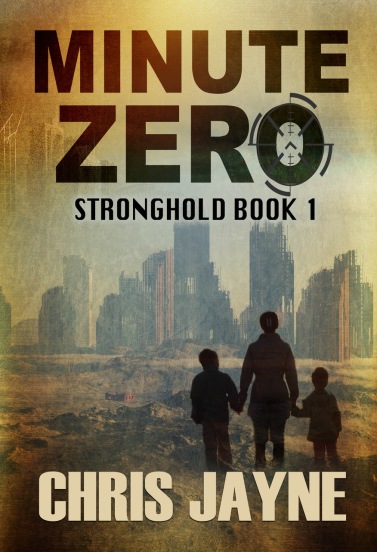 When the world ends in a heartbeat, suddenly old secrets don’t matter anymore. But new ones still do, and protecting the ones you love is the only thing that still remains.

Two sisters, one a trendy caterer on the run from a vicious killer, the other a country midwife.

Because of a simple mistake, Lori Dovner must flee from the vicious mafioso Raoul Saldata, and her life goes from routine day to terrifying journey in a single moment. On the road with her two children, her only goal is to get to her sister’s Montana farm alive. But both Lori and Louise have been hiding a devastating secret for years.

Two brothers, one a Navy Seal on leave, the other a good man who wants to do right by his family.

Captain Deacon Hale is taking two weeks to help his brother Roger and his wife Louise on their remote Montana farm. He loved Lori once, but has finally put her behind him. Roger Hale just wants to give his pregnant wife and two young children a good life. He has no idea about the betrayals that have been hidden from him.

Angela Jones is an FBI agent with a terrible debt that she knows she will someday have to pay. And when Raoul Saldata calls in that marker she has no choice but to comply.

Raoul Saldata as a child in Albania, would pretend he was a dhampir, the offspring resulting from the mating between a human female and a vampire. A myth of course, but the evil Saldata practices is anything but. And when he finds Lori Dovner, he intends to do a lot more than just kill her.

“Minute Zero” Stronghold: Book One is an apocalyptic EMP thriller (with a touch of romance) about an ordinary family struggling to stay safe and find each other in the face of insurmountable odds, an abysmal loss of life and the dawn of a new, post-apocalyptic dark age.

His voice came back, quick and sure. “What’s going on? Where are you?”

“I’m at a rest area about an hour outside of Billings.”

“West. We’re maybe twenty miles from where we go off the highway and come north to Lewiston. I can’t remember the road number.”

“191,” he supplied. She heard Roger speaking to someone else in the room, his voice distant, as if he was holding the phone away from his mouth. “Top drawer of the desk. Yeah, there. There’s a road atlas in there.” His voice came back into the phone. “I’m think I know where you are, but I’m getting a map. What’s going on?”

“The man who is after me is here. His name is Raoul Saldata and…”

“There? Now? With you?” Roger’s voice, while remaining calm, still carried a note of real urgency.

“Yes. If he’d seen me, there’s no way he would have driven off.” She quickly shared with her brother-in-law her guess that if it were not for Grace’s illness, they would already be at their destination and because of that, Saldata was no longer looking for them on the road. “Roger,” Lori voice cracked, “he wants to kill me. And he’s not alone. He’s got two people with him, a man and a woman.”

Lori heard what sounded like a door slam and then another voice muffled in the background, the words unintelligible, but it was definitely a male voice, and not her sister.

“How long ago was this?”

“Just a couple of minutes. I saw him, watched him leave, walked back to my car, and then called you.” She did the quick math. “No more than five minutes.”

“So, two hours from here,” Roger stated flatly. Lori got the feeling he was talking to someone else as well as to her. “Is he armed?”

Lori swallowed, her throat dry as dust, thinking about what she’d seem at Saldata’s house. “I’m sure he is. But,” Lori had a sudden thought, “can you bring guns on the plane?”

“He was in a rental car. I assume he flew. That means he would have had to bring the guns on the plane, right? Can you do that?”

“You have to declare them if you fly commercial. But, if this guy has enough money or influence, he may have come on a private jet. Then he could bring anything he wanted.” Roger paused. “Tell me about who he’s with.”

“I don’t know who they are. I don’t know this man, really, at all. I just did a party for him. But, the first one is some sort of helper. A bodyguard maybe. I saw him at Saldata’s house. The other one is a woman. Young, maybe thirty. Very professional.” Lori envisioned what she’d seen in the restroom and suddenly Lori realized exactly what she looked like. “Like a lawyer or a detective maybe. She saw me in the bathroom.”

“She saw you?” Roger couldn’t hide the shock from his voice.

“Yes,” Lori explained, “but she didn’t recognize me. I cut my hair really short and dyed it black. I look very different. And the kids weren’t with me, thank God.”

There was a long pause as Roger was obviously considering the next steps. “Did you notice the model of the car?”

“No, Roger, I’m sorry, I don’t really know car models. It was a small SUV.” She thought about car models that she knew, ones that she and some of her friends owned. “It wasn’t as big as my Range Rover. Maybe something like a Toyota 4Runner. That size. It was gray. And it definitely had Montana plates.”

“How did he know you were coming here?”

“I don’t know, but…” Quickly, Lori shared with Roger her fear that Saldata had somehow found her employees, Salvadore and Michelle.

As she waited for Roger to respond, she watched her two children with Simone. Brandon had run over to Simone, and, his face turned up, he said something to her. He smiled, so sweet and trusting. My God, she had to protect them, all of them. The silence on Roger’s side of the call grew. “What should I do? Where should I go? I’m so sorry.” She heard her voice rising to shrill, but she couldn’t stop it.

Roger interrupted curtly. “What’s done is done, Lori. You need to hold it together. And the only thing that matters now is keeping everyone safe.”

“I don’t know what to do. Even if I turn around and I didn’t come to you, he’s still on his way there.”

“I want you to stay there.”

“Yes, I’m going to send someone to get you. Do you remember my brother Deacon? He’s on leave and visiting us for a few weeks.”

For the second time in ten minutes, Lori felt like she’d been punched in the stomach and for a very long moment, she could not breathe. On a day when things could not possibly have gotten worse, they just did. “I met him at your wedding,” she managed to choke out. That flat statement masked a wealth of information. Did Roger notice how strangled her voice was?

Lori remembered Deacon Hale very well, but now was not the time to dwell on it, though why in the name of all that was holy had her sister not mentioned that Deacon was there visiting them? For a brief hysterical second, she wondered if she’d be better off taking her chances with Saldata. And in the next moment, she knew a hard truth, one she had never allowed herself to acknowledge. The main reason she had avoided being around Lou and Roger for the last five years was that Roger reminded her way, way too much of Deacon. She could barely gasp out her next, strangled question. “So, you’re not coming?”

“No.” Roger’s voice was flat and hard. “If what you say is true, I have three people on their way here who are perfectly capable of putting a bullet into the brains of anyone in my family.”

“You think I should just wait here? At the rest stop? What if he comes back?”

“You’re sure the woman didn’t recognize you?”

“Yeah, I’m sure. She just walked right out of the bathroom. I look really different, Roger.”

“Then, they won’t come back,” Roger responded, his voice full of confidence. “Why would they? And even if they’d turn around for some reason, they’d be on the other side of the interstate.” Lori saw the logic in that. “Just sit tight. Deke’ll be there in two hours, give or take.”

In less than three hours she’d see him. See Deke. Could she do it? There was no way. No. Fucking. Way.

The phone went dead in her hand.

And in one instant the world changed forever. 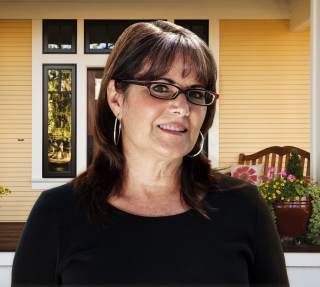 Chris Jayne is author of the apocalyptic EMP series “Stronghold.”

Jayne is also the penname of a USA Today bestselling romance and thriller author who is has started asking “what if?” What if the lights go off? What if the food supply chain just… stops? The world could become an unfriendly place in a hurry.

Three years ago, Chris began exploring the “prepper” lifestyle, and hopes that if TEOTWAWKI would actually happen, she would be in a position to protect her family and loved ones.

She now spends her days splitting her time between her romance writing and her apocalyptic and dystopian fiction novels. Because what’s more fun than imagining the end of the world from the comfort of your couch? And if the end of the world has a few sexy Navy Seals in it? All the better!

She loves writing stories exploring how ordinary people cope with extraordinary circumstances, especially situations where the normal comforts, conveniences, and rules are stripped away.

For a chance to win a $10 Amazon gift card, click the link below! Giveaway will be open from September 11th to the 14th.
A Rafflecopter Giveaway