Tanz is a wine soaked, potty mouthed, once successful TV actress from Gateshead, whose career has shriveled like an antique walnut. She is still grieving her friend Frank, who died in a car crash three years ago, and she has to find a normal job in London to fund her cocktail habit.
When she starts work in a new age shop, Tanz suddenly discovers that the voices she’s hearing in her head are real, not the first signs of schizophrenia, and she can give people ‘messages’ from beyond the grave. Alarmed, she confronts her little mam and discovers she is from a long line of psychic mediums.
Despite a whole exciting new avenue of life opening up to Tanz, darkness isn’t far away and all too soon there’s murder in the air.

After a fast paced introduction to the world of clairvoyance, ghost busting, mystery and murder, Tanz is currently hiding in bed, having nightmares about a suicidal psychopath, drinking red wine, irritating her cat and waiting to be evicted. Life as she knew it seven months ago has turned on its head and only the prospect of a new TV job in Newcastle and a month with her best friend Milo can help pick her up off the floor.
But when she gets home, the Newcastle of more than a century before decides to haunt her bringing all kinds of spooks and horrors with it. She also finds that her new job involves more than it’s own share of intrigue and humiliation. Then it’s a case of six of one and half a dozen of the other, as Tanz, along with her dead friend Frank, attempts to expose a brutal murder that nobody even knows about. Join Tanz and her friends on another crazy, supernatural ride in GIN PALACE, the second in The Accidental Medium series.

Tracy Whitwell was born, brought up and educated in Gateshead in the north east of England. She wrote plays and short stories from an early age, then had her head turned and ran off to London to be an actress. By 1993 she was wearing a wig and an old fashioned dress and pretending to be impoverished on telly in a Catherine Cookson mini-series, whilst going to see every indie/rock band she could afford.

After an interesting number of years messing about in front of the camera and traveling the world though, Tracy discovered she still loved writing and completed her first full length play. A son, many stage-plays, screenplays and two music videos followed until one day she realised she was finally ready to do the thing she’d longed to do since she was six. She wrote her first novel. A crime/horror/comedy tale about an alcohol-soaked, gobby, thrill-seeking actress who talks to ghosts. (Who knows where the inspiration came from, it’s almost like she based it on her own ridiculous life.) Then she wrote a follow up and realised she couldn’t stop writing books.
Now Tracy lives in north London with her son, still travels whenever possible and has written novel number four. Now being edited.
Twitter

Both of these books were tremendous fun, I wish Tanz was my pal, she’s so full of life and determined to help people, she solves murders modern and historic, frees people from terrible, cruel ghosts.

Discovering she can hear the voices of the unsettled dead, she teams up with two older woman (one in each story) to help the dead and the living.

The writing is funny, moving and the plots kept me entertained and intrigued all the way through. I look forward to more tales of Tanz and her pals. 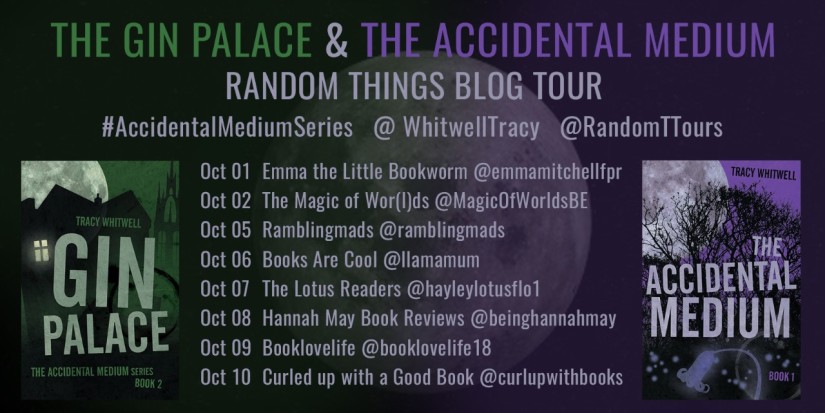