Congratulations to author Ann Maxwell on the release of her novel, Fire Dancer! Read on for details, and excerpt and a chance to win a Kindle copy of the book! 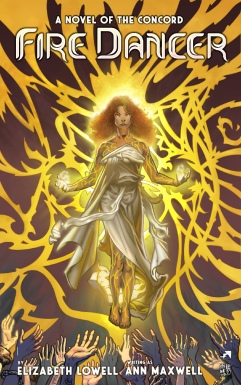 Rheba and Kirtin are the last survivors of their homeworld, at the edges of the Concord, forgotten but rich in history and traditions. Rheba is a fire dancer, able to focus and manipulate vast amounts of energy through discipline and motion and form. Kirtin is her protector and mentor, training her in these skills and knowing that one day these energies may grow to consume her unless she masters her own emotions and the power she derives from them. In search of rumored other survivors like themselves, they set out amongst the worlds of the “civilized” Concord, finding that the presented superior and enlightened cultures they encounter conceal hypocrisies that assist even greater crimes. Entire civilizations built upon slavery and degradation are tolerated so long as they play the proper games of power and civility. Led by the promise of knowledge regarding one of her kin, Rheba and Kirtin are brought to Loo, a planet ruled by a hereditary empire of slavers and decadents. There, both of them are consigned to slave pits beneath the gleaming cities and palaces of the surface. Amongst the forgotten and cast-off, Rheba and Kirtin find others like themselves, stolen or abandoned by their homeworlds and left to languish here, subject to labors and appetites and whims of the planet’s rulers. But not everyone wants to remain a slave…

Onan was the most licentious planet in the Equality, if not the whole of the Concord itself. No activity was prohibited. As a result, the wealth of the Concord flowed down Onan’s gravity well—and stuck. Nontondondo, the sprawling city-spaceport, was a three-dimensional maze with walls of colored lightning, streets paved with hope and potholed by despair, and a decibel level that knew no ceiling.

“Kirtn!” Rheba shouted to the huge Bre’n walking beside her. “Can you see the Black Whole yet?”

Kirtn’s hands locked around Rheba’s waist. In an instant her lips were level with his ear.

She shouted again. “Can you see the casino?”

“Just a few more buildings,” he said against her ear.

Even Kirtn’s bass rumble had trouble competing with the din. He pursed his lips and whistled a fluting answer to her question in the whistle language of the Bre’ns. The sound was like a gem scintillating in the aural mud of Nontondondo. People stopped for an instant, staring around, but could find no obvious source for the beautiful sound.

All they saw was a tall humanoid with very short, fine coppery plush covering his muscular body, giving it the appearance and texture of velvet. On his head, the fur became wavy copper hair. A mask of metallic gold hair surrounded his eyes, emphasizing their yellow clarity. His mask, like the coppery plush on his body, was the mark of a healthy Bre’n.

Although Rheba looked small held against the Bre’n, she was above humanoid average in height. Her hair was gold and her eyes were an unusual cinnamon color that seemed to gather and concentrate light. Other than on her head and the median line of her torso, she had neither hair nor fur to interrupt the smooth brown flow of her body. Almost invisible beneath the skin of her hands were the whorls and intricate patterns of a young Senyas fire dancer.

Rheba slid down Kirtn’s body until she was standing on her own feet again. As she regained her balance, a man stumbled out of the crowd and grabbed her. He rubbed up against her back, bathing her in unpleasant odors and intentions. The patterns on her hands flared as she reached toward a dazzling electric advertisement, wove its energy, and gave it to the rude stranger. He leaped back like he had been burned.

“I don’t think he’ll play with a fire dancer again,” Kirtn said in a satisfied voice.

He picked up the shaken man and lofted him onto a passing drunk cart. Then the Bre’n gathered up Rheba again and shouldered his way into the anteroom of the Black Whole. After the streets, the quiet was like a blessing. Kirtn smiled, showing slightly serrated teeth, bright and very hard.

“Not that he would’ve seen one before, or is likely to again.”

Rheba scratched the backs of her hands where the patterns had flared. Her hair shifted and moved, alive with the energy she had just called. Muttering the eighth discipline of Deva, she let both energy and anger drain out of her. She had come into this city willingly and so must abide by its customs, no matter how bizarre or insulting they might be to her.

“We should have taken out a license to murder,” she said in a mild voice.

Kirtn laughed. “We didn’t have enough money to buy a half-circle of silver, much less the whole circle of a licensed killer.”

“Don’t remind me. We could hardly afford to be licensed innocents.” Rheba grimaced at the mere 30 degrees of silver arc stuck to her shoulder. “Come, let’s find the man we came for and get off this festering planet.”

They had not taken three steps before a black-dressed casino employee approached them. His only decoration was a simple silver circle fastened on his shoulder. Kirtn and Rheba saw the man’s license at the same instant. When the man spoke, he had their attention.

“That,” said the man, hooking a thumb at Kirtn, “is a furry. You’re a smoothie. Smoothies only at the Black Whole. If you don’t want to separate, try the Mink Trap down the street. They like perverts.”

Rheba’s long yellow hair stirred, though there was no breeze inside the Black Whole’s anteroom. Kirtn spoke a few rapid words in Senyas, native tongue of Senyasi and Bre’ns alike. “If we kill him, we’ll never get a chance to talk to Trader Jal.”

“I wasn’t going to kill him,” Rheba said in Senyas, smiling at the man with the silver circle who could not understand her words. “I was just going to singe his pride-and-joys.”

She began to object, then shrugged. The last time they had bumped against local prejudices, she had been the one to wait outside. She couldn’t remember whether sex, color, number of digits or lack of fur had been at issue.

“I’ll make it as fast as I can,” she, said, her hand on Kirtn’s arm, stroking him. She took an uncomplicated pleasure from the softness of his fur. his strength and textures were her oldest memories, and her best. Like most akhenets, she had been raised by her Bre’n mentor. “I can understand a prejudice against smoothies,” she murmured, “but against furries? Impossible.”

Kirtn touched a fingertip to her nose. “Don’t find more trouble than you can set fire to, child.”

She smiled and turned toward the licensed employee. She spoke once again in Universal, the language of space. “Does this cesspool have a game called Chaos?”

“Yeah,” the man said. He flicked his narrow, thick fingernail against Rheba’s license. “It’s not a game for innocents.”

Rheba’s hair rippled. “Is that opinion or law?”

The man did not answer.

“Where’s the game?” she asked again, her voice clipped.

“Across the main casino, on the left. A big blue spiral galaxy.”

Rheba sidestepped around the man.

“I hope you lose your lower set of lips,” he said in a nasty voice as she passed him.

She walked quickly across the anteroom of the Black Whole, not trusting herself to answer the man’s crude comment. As she passed through the casino’s velvet force field, a babble of voices assaulted her. Throughout the immense, high-ceilinged room, bets were being made and paid in the Universal language—but gamblers exhorted personal gods in every tongue known to the Concord.

Rheba knew only three languages—Bre’n, Senyas, and Universal—and Kirtn was the only other being who knew the first two, so far as she knew. The babbling room made her feel terribly alone. One Senyas, one Bre’n. Only known survivors of the violent moment when Deva’s sun had built a bridge of fire between itself and its fifth planet.

One galaxy of strangers.

With an effort, she shut away the searing memory of extinction. She and Kirtn had survived. Surely others must also have survived. Somehow. Somewhere. She would find them, one by one, if it took all the centuries of her life.

Available for Kindle and at Barnes & Noble! About the Author

New York Times bestselling author Ann Maxwell, also known as A.E. Maxwell and Elizabeth Lowell, is an American writer. She has individually, and with co-author and husband Evan, written more than 50 novels and one non-fiction book. Her novels range from science fiction to historical fiction, and from romance to mystery to suspense.

Giveaway: You can win one of 10 copies of the book for Kindle! Click the link below! a Rafflecopter giveaway

The Magic of Wor(l)ds (Spotlight) http://themagicofworlds.wordpress.com