After a blazing row with her mother, sixteen-year-old Allie Lawrence impulsively runs away from the family home in Killiecrankie, with no plan other than to go to Edinburgh to ‘be an actor.’

Then a chauffeur-driven car pulls up beside her and she’s offered a lift by its handsome and mysterious passenger, Nick. Against her better judgement, she accepts – and soon discovers that he is a ‘manager,’ who claims he can make all her dreams come true.

She just needs to sign a contract… The Sins of Allie Lawrence is a tale of temptation, inspired by the legend of Black Donald, and set against the vibrant world of the theatre. 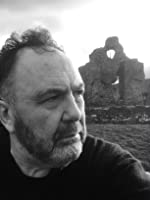 Philip’s Caveney is an award-winning author whose first novel was published in 1977. Since then, he has published many novels for adults and since 2007, a series of children’s books that have sold all over the world, the Sebastian Darke series and another well-received series – The Alec Devlin Mysteries. He has written the successful Crow Boy trilogy for Fledgling Press and The Calling and The Slithers too. Philip also writes as Danny Weston – winner of the Scottish Book Trust Teen award 2016. Philip now lives and writes in Edinburgh.

Black Donald is a Scottish myth/legend and an iteration of the Devil, and this story about temptation and bring careful what contracts you sign reminded me of another story about Old Nick – Faustus.

Allie is sixteen and while running away from home is offered a lift by a grinning stranger, who introduces himself as Donald “but you can call me Nick”.

After that suddenly all her dreams are coming true, one signed contract, and she has a fancy apartment in Edinburgh, a starring role in a new play and a PA called Sorcha who drinks a lot of wine but never eats.

Is it all too good to be true? Is Nick manipulating everyone around her and what exactly does he get out of this arrangement?

A clever, funny and entertaining remaining of an old tale, which proves you still have to watch out, and thoroughly read all your contracts!