When only the dead have the answers, who can tell you the truth?

Retired PSNI cop Tom ‘Tucker’ Rodgers has a cracked ballpoint pen, one second class stamp and no time left. The best he can do is try to get a message to DI Owen Sheen, the only man he knows he can trust.

Sheen and DC Aoife McCusker are struggling with political agendas fed to them from the Chief Constable and now the single note from the missing Tucker is preying on Sheen’s mind. A list of four dates, decades old, and a cryptic message. Tucker says that they killed his friend, and now they’re coming for him. Sheen and Aoife’s search places them on the path of the most highly placed IRA double agent of the Troubles as well as another man with an old score to settle…

About the Author
Gary Donnelly is a writer and teacher who was born and raised in west Belfast. After attending a state comprehensive school, he read History at Corpus Christi College, Cambridge and has lived and worked in London since the late 1990s.

This was really good, the detectives are part of a historic crime unit, mostly dealing with the Troubles, which brings them into contact with some very dangerous people. But they’re determined to do their jobs and solve the cases that have been left untouched for some time.

A letter addressed directly to DI Sheen, with a mysterious key word and a set of dates, spark a complex and deadly investigation into the role of a tout or grass, one who may have been responsible for an awful lot of death.

As they attempt to find the mysterious person, criss crossing Belfast, seeking out survivors who might have a clue, they’re unaware someone is out to stop them.

Edge of your sear gripping stuff, a smart thriller with a political element and the weight of the Troubles echoing through the places and people. 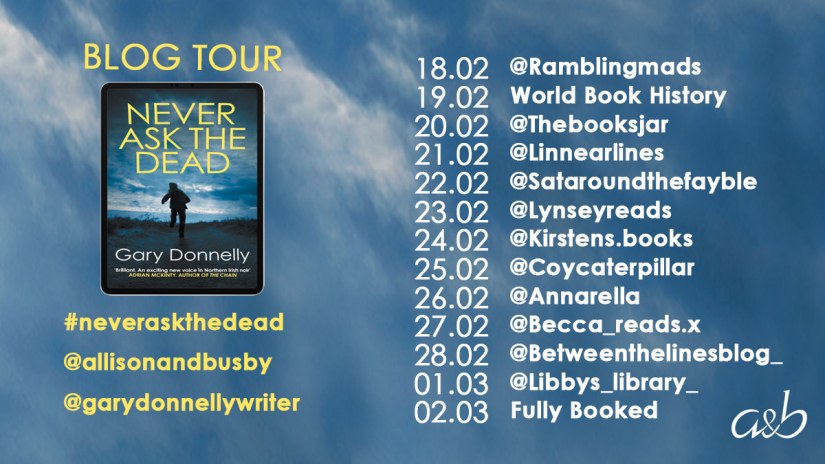