Read my reviews of The Failsafe Query and The Kompromat Kill 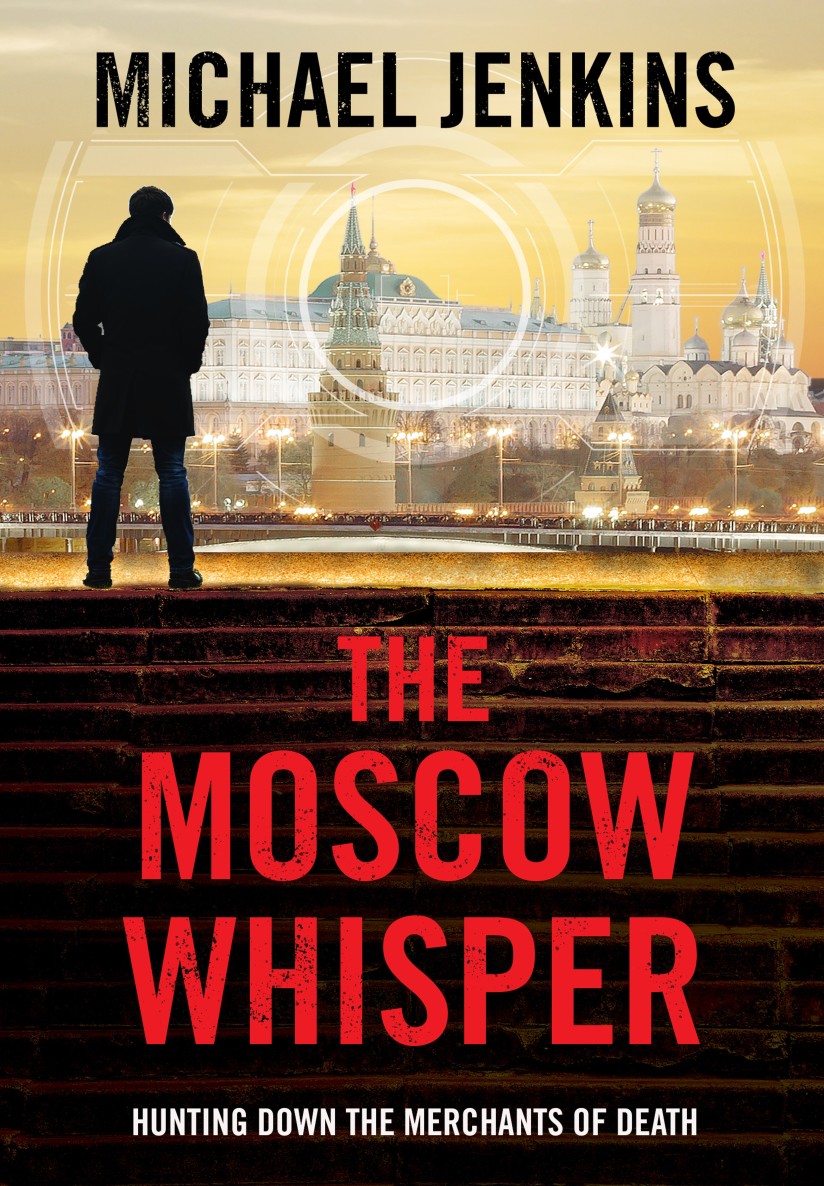 A top-secret clique of former spies meet for dinner to hatch a plan to murder a competitor, not knowing that they are under surveillance from a covert arm of British Intelligence. Hours later, with bodies strewn across a terrace, a piece of secret intelligence reveals an international plot of colossal magnitude.

For disgraced agent Sean Richardson, this is the beginning of a deniable mission to infiltrate and disrupt a group of Russian mercenaries who are working clandestinely to take over a nation state.

Acting covertly as an illicit arms trafficker, Sean is dropped into a deadly cauldron of terrorists and high-tech weaponry that will take a nation down. As the bullets fly and the chaos rains in, can Sean take down the merchants of death…..or has he finally met his match?

One of my favourite extracts from the novel where Sean has to act with guile and stealth to hack into his targets home computer. A nervous espisode, as capture would mean death from the brutal Russian mercenary.

At exactly eight o’clock in the evening, Dozich’s internal CCTV system was infiltrated by The Court’s hackers sitting at their dimly lit consoles somewhere in the quiet Suffolk countryside. Sean’s phone began to vibrate – sure enough, right on time. Jack messaged him on TextSecure and the phone came alive with a green screen showing three dots flickering. ‘Good to go. All stations on standby.’

The Court’s hackers had inserted a Trojan worm deep into the servers of the villa, which quickly propagated laterally to gain the privileged access rights to the CCTV system. The hackers took control of each of the internal cameras that would provide sight of Sean making his way to the rooms he would search.

‘I can come along and keep an eye out for you while you’re in the room you know. It’s my father’s house and if anything goes wrong, I’ll be able to tell a story far better than you at being caught mooching around like a jewel thief.’

‘Funny that, Jack set my legend up to show I was once an amateur thief.’

Had Sean seen the anxious look on Jack’s face back at The Court, he may have taken her up on the offer to tag along. But no. he needed to do this work alone. He stepped outside the door knowing the corridor cameras were now under the control of The Court hackers who had digitally manipulated the imagery being seen by Dozich’s security operators deep in the basement of the villa. He then sent a text to Jugsy: ‘Land the drone on Dozich’s balcony. Five minutes.’

Within three minutes, Sean had turned a key to enter the spacious office which was located on the first floor of the villa. He’d memorised the plans of the villa and the layout of Dozich’s office with the help of Yelena who had managed to coax the information from the housekeeper as well as the location of the spare key that her father always left in the vase opposite the door.

As Sean started to rummage the room, he still couldn’t work out why Yelena had been so accommodating, so helpful. Almost from the very beginning when he first caught her half naked in that room in Tuscany. Since that moment, it had not been at all difficult to extract information from her. Indeed, she even steered him straight to the Albanian thug. Why, he wondered?

His phone began to ring. The signal that the drone was now inbound and imminent. Sean walked over to the terrace, released the latch on the sliding door, and stepped out to be confronted by a buzzing quadcopter two feet ahead of him at head height. He imagined Jugsy grinning at him through the onboard camera, so he decided to give him the finger. Following a smile at the ugly whirring beast, he grabbed a small black pouch from a cradle below the drone’s belly. He gave a thumbs up into the eye of the onboard camera, and watched it lift quickly before silently peeling off into the night to land on the roof of the villa.

Sean pointed his penlight towards the large white desk that sat neatly in the corner of the room with two twenty-inch screens and a desktop computer. He gazed briefly at the three large pictures behind Dozich’s desk. His gaze turned into serious study. Something had caught his eye. One picture had three men dressed in Spetsnaz fatigues and Dozich holding an AK47. It looked like it was taken in Afghanistan. Dozich was stood next to a man Sean recognised. It was a much younger Sergei. The Russian spy Jack had recruited and the man he had met only a year ago in the very conference room that Jack was now sat in. Sean’s nape began to tingle. What if Sergei had played Jack all along? Surely this is too much of a coincidence for Sergei, the lead officer for a Russian illegals programme in the UK, to be a military friend of Dozich?

Sean took a photo of the wall mounted picture with his smartphone and beamed it back to Jack using the secure photo app specially designed for Court operations. He muttered a few words to himself about moles and how Swartz might have been compromised, before sitting at the desk. The computer screen was alive with a background picture of a mountain view. He tapped the return button to bring up the password box. He then stood up and walked around the room once more until he finally found what he was after. A small second desktop machine with a laptop beside it on a small table next to an open fireplace. Sean instinctively knew that Dozich would probably use the laptop for emails and internet transmissions, whilst he kept his main desktop machine isolated from any intruders who would hack into his machine via the internet. Operational security for organised crime lords in the digital world was a must, and one that Dozich would take seriously.

Sean tapped the number into his phone that he’d been given by Jack to speak to a Court operator in the operations room back in Suffolk. The hacker would help him get into the machine to search and retrieve all of the files of Dozich’s illicit trade, his financial connections and any connecting evidence to Sir Rhys.

‘OK, this won’t take long. First off, there are two pensticks in the black pouch. Both will be required to perform this attack which should take less than five minutes. The blue stick will be used to create a live USB that will boot on the laptop while, the yellow stick holds the payload that will then be executed on the device. It will infiltrate the machine and search for the password hash. Place the blue one in now.’

Sean drew the blue pen drive from his jeans pocket and placed it into the USB drive. ‘Done,’ he said waiting impatiently for the next instruction.

‘OK, now on the pen drive is a small switch. Turn it on so a green light flashes once before going solid after five seconds.’

‘Just sit back for about three minutes or so. It’ll boot on the laptop and also sniff for the drone sat above you on the roof, and once it’s connected, we’ll have a transmission frequency to extract the data we need.’

I started climbing at 13, survived being lost in Snowdonia at 14, nearly drowned at 15, and then joined the Army at 16. Risk and adventure was built into my DNA and I feel very fortunate to have served the majority of my working career as an intelligence officer within Defence Intelligence, and as an explosive ordnance disposal officer and military surveyor within the Corps of Royal Engineers.

I feel privileged to have served for twenty-eight years in the British Army as a soldier and officer, working in Defence Intelligence and Counter-Terrorist Bomb Disposal operations, rising through the ranks to complete my service as a major. I served across the globe on numerous military operations as well as extensive travel and adventure on many major mountaineering and exploration expeditions that I led or was involved in.

I was awarded the Geographic Medal by the Royal Geographical Society for mountain exploration and served on the screening committee of the Mount Everest Foundation charity for many years. It was humbling after so many years of service when I was awarded the MBE for services to counter-terrorism in 2007

This is the third book in the Sean Richardson series, following on from the events of The Kompromat Kill. This time Sean is chasing a team of Russian mercenaries aiming to destabilise a country. And it’s personal too.

The mix of high stakes action and political backroom dealings that characterise the series are present and correct, with further character development and a larger role for Sean’s handler – Jack. Sean’s pals Billy Phish (and his ace sniffer dogs), Phil the Nose and One-Eyed Damon are also on hand for more dangerous adventures in international espionage.