A sudden death in the family delivers Julia a box of love letters. Dusty with age, they reveal an illicit affair between the celebrated twentieth-century Irish novelist Elizabeth Bowen and Humphry House – Julia’s grandfather.

So begins an intriguing quest to discover and understand this affair, one with profound repercussions for Julia’s family, not least for her grandmother, Madeline.

This is a book about how stories are told in real life, in fiction and in families. Inspired by Bowen’s own obsession with place and memory, Julia travels to all the locations in the letters – from Kolkata to Cambridge and from Ireland to Texas.

The reader is taken from the rarefied air of Oxford in the 1930s, to the Anglo-Irish Big House, to the last days of Empire in India and on into the Second World War.

The fascinating unpublished correspondence, a wealth of family photographs, and a celebrated supporting cast that includes Isaiah Berlin and Virginia Woolf add further richness to this unique work.

The Shadowy Third opens up a lost world, one with complex and often surprising attitudes to love and sex, work and home, duty and ambition, and to writing itself.

Weaving present-day story telling with historical narrative, this is a beautifully written debut of literary and familial investigation from an original and captivating new voice.

Julia Parry was brought up in West Africa and educated at St Andrews and Oxford. She teaches English literature and has worked as a writer and photographer for a variety of publications and charities. She lives in London and Madrid. This is her first book.

This was utterly fascinating and totally absorbing a read. As someone whose own family has a few mysteries, I could completely relate to the author’s desire to follow in her grandparents footsteps and unravel the complex relationships at the heart of this book.

I read Elizabeth Bowen’s The Heat of the Day at uni, but we focused more on the text than the writer, so it was also interesting to learn more about her life, and its web of affairs, especially the way Parry connects Bowen’s written works, short stories and novels, to the parallels in her own life.

Part biography, part mystery, part memoir, this was a truly brilliant debut, well written and expertly paced, as you travel with Parry to Kolkata, Ireland, and across the UK. 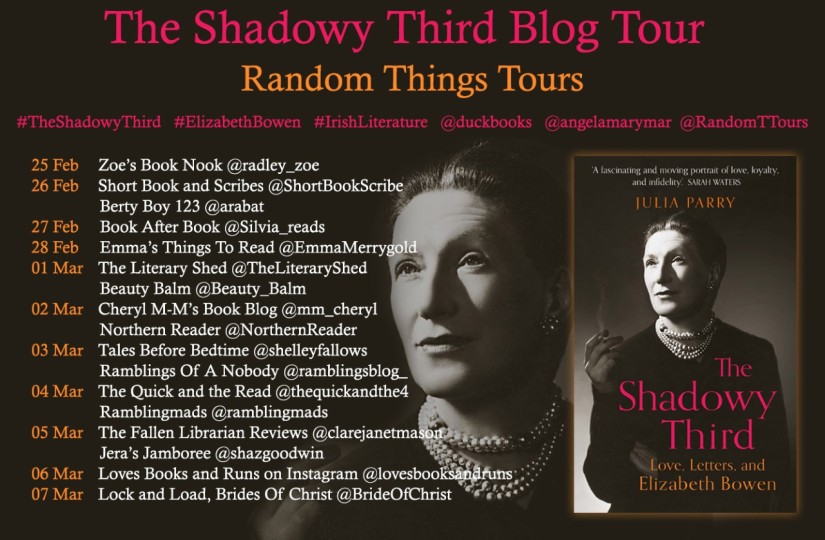