Congratulations to Didi Oviatt and James J. Cudney on the release of their novel, Weathering Old Souls!

Read on for details, an exclusive excerpt and a week full of fantastic giveaways!

Abigail has always struggled with strange voices appearing inside her head. From the relentless tyranny a woman faces on an antebellum plantation to the unknown prison camps in America during World War II, our heroine discovers the past in a way that forever changes her future. There are moments from previous periods that serve as guiding posts for the country’s growth, but they also mark the transitions for Abigail’s own personal history. Her best friend, Margaret, partners with Abigail to discover the identity of these voices while focusing on her passion and quest to become a United States senator. Through it all, a serial killer torments the country, romance blossoms between some of the people they meet during the journey, and secrets long thought buried come to light in devastating ways. With the twisting of elements, numerical alignments, and the trauma of spiritual entanglements, no one will be the same… and just a few might not even be around anymore. 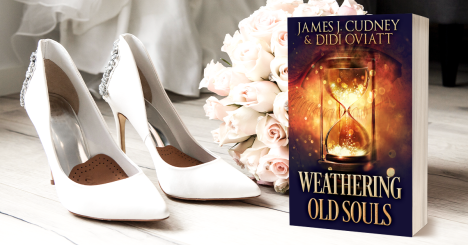 One morning as winter should’ve been transitioning into spring, an eight-year-old Abigail awakens with a piercing scream. She bolts upright and snails herself to the edge of her bed, placing a heavy hand on her chest to help steady herself and catch her breath. Her body twinges as though she’s fallen down a flight of stairs or been slammed by a double-decker trolley. The agony starts in the muscles behind her shoulder blade. From there it feels like a rocket exploded, escaping through her chest, leaving only traces of burning gases to snake their way through the rest of her fragile body. She coughs violently as her system tries to rid itself of unknown toxins.

The bedroom is dark and frigid because the pipes broke the previous day and her father was too busy sleeping off a hangover to call a contractor to fix them. Oliver has no mechanical knowledge or experience with home repair, but he tells Abigail that the Stauntons will address the issue since their heating system has also experienced problems with the winter storms that year. It’s been an unpredictable season, much more so than the usual winter in South Carolina. Some days Abigail has played outside all afternoon, hardly catching a chill. Others she wakes to a beautifully ominous layer of frost clinging to every blade of yellow grass as if its very life depends on it.

A thin glint of light pushes through the crack between the bottom of the broken shade and the splintered windowsill. Abigail watches as the sparkly dust settles on the foot of her bed and shines brightly. It reminds her of the quartz necklace dangling on the neck of the woman in her scary dream. It was gorgeous and made the woman feel safe and comforted as it has in every dream where it made an appearance. Abigail’s told Margaret about the necklace many times, wishing she could hop out of bed today and do it again. It’s only been two months since she saw Margaret, but missing her is more than just a faint feeling. It’s soul crushing. She aches for Margaret’s companionship like any other child would her own sibling who’s grown up and gone on without her.

In her nightmare, Abigail was stuck inside the body of an old lady running through a field, sweat pouring from her head down the curves of her hollowed and withdrawn cheeks. It was pitch black, and there were trees all around her, the wind shaking the branches such that they whispered secret directions in an unknown language. They resembled monsters with claw-like arms and vicious teeth, ready to bite her flailing limbs. Someone had been chasing her, but Abigail never saw the figure’s face.

Confusion rocks her body. Part of her is the small innocent child who wants to scream for Elizabeth, but a stronger piece of her feels much older, more mature, as if she’s lived for decades, maybe even centuries. She shakes through the aftermath of terror, unable to make sense of what happened in her sleep. All she knows is that it was horrific and made her fear something awful was destined to happen. Abigail wonders if her nightmares relate to the bits of conversation she’s overheard between Elizabeth and Bradford in the past. Elizabeth once said something about a killer coming after them again, but they’d ultimately agreed they were much safer now.

After deliberating with Imaginary May for a few moments, Abigail announces, “I can handle this on my own. I am a big girl. Margaret’s gone, but she taught me to be strong.”

She cuddles the teddy bear that Elizabeth gifted her last month for Valentine’s Day. Elizabeth had always bought one for Margaret when she was a child, the kind of mother and daughter tradition that Abigail has always yearned for. This is the first year that Margaret has been away for Spring Break during Valentine’s Day. Elizabeth missed her daughter immensely, so she purchased two identical teddy bears at the local toy store. One for Margaret, who would be home on Spring Break soon, and one for her favorite little neighbor and second daughter.

With a heavy sigh, Abigail stretches her arms above her head, extends her legs, and spreads her toes apart. Then she drops her chin to her chest, before rolling her head around in big circles. Four times each direction, one for every major element. She studied them in school that year. With each round of her neck, Abigail breathes in and counts to ten, then she lets out the air and reminds herself of everything she has to be grateful for. Margaret once taught her this morning routine, to help her ease the body tremors brought about by a nightmare, as the last doctor she saw refused to give any pain medication or advice. The stretching and breathing exercises help, and her pains slowly evaporate like a faint mist over a swamp.

An oblong mirror that’s mounted to the wall across from her window offers Abigail a dust-clouded view of her messy hair as it knots and sticks out in every direction, along with her worn-out unicorn covered nightgown. She chuckles at the sight of herself, and the last of her anxiety and spasms disappear. She imagines the body aches to have a color, a dull shade of lilac, as they lift in a swirling pattern like hazy smoke and exit out of the beam of light coming through the window.

“Stay away, you filthy bloke,” she chastises the imaginary swirl of colorful pain.

About the Author: Didi Oviatt

Didi Oviatt is an intuitive soul. She’s a wife and mother first, with one son and one daughter. Her thirst to write was developed at an early age, and she never looked back. After digging down deep and getting in touch with her literary self, she’s writing mystery/thrillers like Search for Maylee, Justice for Belle, Aggravated Momentum, and Sketch, along with multiple short story collections. She’s collaborated with Kim Knight in an ongoing interactive short story anthology, The Suspenseful Collection. Most recently, she published her first romance novella titled Skinny Dippin’ which was originally released as a part of the highly appraised Anthology, Sinners and Saints. When Didi doesn’t have her nose buried in a book, she can be found enjoying a laid-back outdoorsy lifestyle. Time spent sleeping under the stars, hiking, fishing, and ATVing the back roads of beautiful mountain trails, and sun-bathing in the desert heat play an important part of her day to day lifestyle.

About the Author: James J. Cudney

James is my given name, but most folks call me Jay. I live in New York City, grew up on Long Island, and graduated from Moravian College, an historic but small liberal arts school in Bethlehem, Pennsylvania, with a degree in English literature and minors in Education, Business and Spanish. After college, I accepted a technical writing position for a telecommunications company during Y2K and spent the last ~20 years building a career in technology & business operations in the retail, sports, media, hospitality, and entertainment industries. Throughout those years, I wrote short stories, poems, and various beginnings to the “Great American Novel,” but I was so focused on my career that writing became a hobby. In 2016, I committed to focusing my energies toward reinvigorating a second career in reading, writing, and publishing.

Writing has been a part of my life as much as my heart, mind, and body. At some points, it was just a few poems or short stories; at others, it was full length novels and stories. My current focus is family drama fiction, cozy mystery novels, and suspense thrillers. I conjure characters and plots that I feel must be unwound. I think of situations people find themselves in and feel compelled to tell the story. It’s usually a convoluted plot with many surprise twists and turns. I feel it necessary to take that ride all over the course. My character is easily pictured in my head. I know what he is going to encounter or what she will feel. But I need to use the right words to make it clear.

Reading has also never left my side. Whether it was children’s books, young adult novels, college textbooks, biographies, or my ultimate love, fiction, it’s ever present in my day. I read two books per week and I’m on a quest to update every book I’ve ever read on Goodreads, write up a review, and post it on all my sites and platforms.

I have combined my passions into a single platform where I share reviews, write a blog and publish tons of content: TRUTH. I started my 365 Daily Challenge, where I post about a word that has some meaning to me and converse with everyone about life. There is humor, tears, love, friendship, advice, and bloopers. Lots of bloopers where I poke fun at myself all the time. Even my dogs have had weekly segments called “Ryder’s Rants” or “Baxter’s Barks,” where they complain about me. All these things make up who I am; none of them are very fancy or magnanimous, but they are real. And that’s why they are me.

I love history and research, finding myself often reaching back into the past to understand why someone made the choice he or she did and what were the subsequent consequences. I enjoy studying the activities and culture from hundreds of years ago to trace the roots and find the puzzle of my own history. I wish I could watch my ancestors from a secret place to learn how they interacted with others; and maybe I’ll comprehend why I do things the way I do.