Welcome to the blog tour for The Wars Between US by J.A. Boulet. Read on for an excerpt and a chance to win a $15 Amazon gift card!

The Wars Between Us (The Olason Chronicles)

Meet Zachary Olason, a bad boy struggling on the brink of alcoholism. During the Great Depression, Zack loses himself and spirals into nights of debauchery, riots and drunkenness. His twin brother, Adam, thinks lowly of him as his entire family struggles to help him.

But Zack is determined to make a mess of his life.

Until he meets a beautiful petite woman, half Cree and part British, who helps him to grow into a better version of himself.

Then just as he thinks life is getting better, he sinks to the bottom of hell. Will he survive from his own self-destruction?

The only way he sees out is to join the Canadian Navy.

The Battle of the Atlantic will either teach him or break him.

THE WARS BETWEEN US

With action packed adrenaline and steamy love scenes, The Wars Between Us will keep you gripped to your seat on a ride of addiction, unwavering love and the fight to stay alive during WWII.

The fields were dry, so dry in fact, that swirls of dirt and sand kicked up in the winds making it difficult to see. The terrible drought had devastated most of the fields and ruined many farming families. Zack was upset that everyone was struggling, even the people who still had family and properties. Many people were becoming destitute. His half-sister, Annabella, and her farming family were hit hard. They were barely surviving, but they somehow managed to grow their own vegetables for food, using the chickens for eggs and fish for dinner. Gimli was still enduring throughout the Depression, with the fishing industry holding things precariously together.

“Get those fishing rods ready, son,” Nath instructed as he lowered the anchor in the middle of the lake. The boat bobbed lazily in the waves as they prepared to fish for the day.

It was early morning. Zack picked up the rods and opened the bait box. He looked up and caught his father’s eye. His dad had aged so much in the last year. He could see it in the way Nathan moved with a slower, more deliberate task in everything he did. His father used to take him and his twin brother into the bush, running, hunting and laughing when they were younger. Now, the only energy Nathan had left was to fish. Zack loved fishing with his dad and absorbed every minute of it, but he was concerned. His dad meant everything to him.

Zack baited the lines and waited until Nath had dropped the anchor securely with a splash in the deep water. He handed Nath the baited rod and turned his attention to the remaining rod, flipping the slippery tiny fish onto the hook.

He smiled at his dad and flung his rod out into the lake, as Nath did the same. The sun would be rising soon over the watery horizon. It was still very early; the skies were just beginning to turn a lighter blue on one side. The west side was still a darker blue of night. It was so strange to Zack how that always seemed so lopsided. Daylight on one side and the night slowly slipping away on the other.

“When is this depression going to end, Pabbi?” Zack asked, using the endearing Icelandic term for father.

“I don’t know, Zack,” Nath replied, gazing over the lake. “I wish I had a crystal ball sometimes. I could see into the future and make better choices.”

“Yes, for some things,” Nath said thoughtfully, thinking of his beautiful young wife, Maria. She was his angel. Maria had helped him to love again. Together they had birthed two strong sons, both of whom had their mother’s bright blonde hair. The boys had inherited his piercing blue eyes and his tall build. He felt blessed every single day for Maria and his family. Nathan couldn’t imagine his life without them.

Zack shuffled on the boat, trying to get comfortable. “Pabbi, I’m seventeen, and I was thinking about joining one of those unemployment labour camps. It would help everyone out if I got a job. Then the strain on you and mom would be less. You wouldn’t have to struggle to feed me anymore. The food has become so sparse, and I don’t want to become a burden on you. I’m young and strong; the camps will feed and house me.”

Nath looked across at his young son, his heart skipping a beat. “Please don’t,” he said. “Those camps are terrible. Deplorable working conditions and even rumoured to have a communist group. I don’t want you getting all messed up with that. We have enough food.”

Zack grinned lopsidedly and accepted his father’s words, although he wasn’t sure that he would listen to his father’s decision. He wanted to travel and experience his life, but Zack felt trapped by the Great Depression. It was like every door he tried to open was locked, and every door that miraculously opened had nothing behind it. He was feeling frustrated and reckless. Zack wanted to make something of his life. He yearned to show people that he was a man and that he had worth.

“Things will get better soon,” Nath said. “They created the Bank of Canada just this past March. The government is changing in a good way, son. You can still work at the fishery with Mike and your cousins.”

Zack closed the door quietly and stepped out onto the wood porch gingerly. He tried not to awake anyone, keeping his departure secret. He had written a short note for his mom and dad, telling them he was off to find some work and not to worry.

It was June 18, 1935. Zack felt uneasy about going against his father’s wishes. He didn’t want his dad to fuss. Zack always had a staunch spirit and felt spurred into action when presented with life’s problems; he simply couldn’t sit by and do nothing. He was once called rebellious by his mother. But it was not entirely true. Zack yearned to do the right thing and felt that without action, there would never be change.

He would come back home when the depression was over. It would save precious food for his momma and his Pabbi.

They would thank him one day.

Zack stepped quietly onto the sand and walked towards the train tracks. He didn’t know where he was going, but Zack knew what he was looking for. He wanted a life he could call his own. 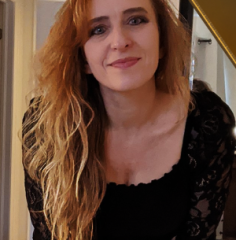 J.A. Boulet is the passionate author of The Olason Chronicles, a historical saga of war, courage, love and strength. Her newest novel The Wars Between Us Book 3 is scheduled for release June 18, 2021 on Amazon. J. A. Boulet was born and raised in Western Canada as a first generation Canadian from European descent. Her father enlisted with the Hungarian military and fought bravely during the 1956 Hungarian Revolution, changing sides to stand up for what he believed in. He was granted asylum in Canada and built his family here.

J.A. Boulet was born many years later, raised with strong morals and values, which she stands behind, to this day. She started writing poetry at the age of five and progressed to short stories and novels. She has a keen interest in settlers, healing, family bonds and military history. J. A. Boulet writes with a spine-tingling realism like none other, grabbing your emotions and refusing to let go. The Olason Chronicles is the series you’ve been waiting for. Watch for the final book (4) in the series, being scheduled for a 2022 release.

Click the link below for a chance to win a $15 Amazon e-Gift Card!