Welcome to the blog tour for award-winning novel, Where Are We Tomorrow by Tavi Taylor Black! Read on for more info and a chance to win a $25 Amazon e-Gift Card!

Where We Are Tomorrow

Alex Evans, a thirty-six year old touring electrician, discovers through an accidental pregnancy and then the pain of miscarriage that she truly wants a family. But to attempt another pregnancy, she’ll have to change both her career and her relationship; her partner Connor, ten years her senior, isn’t prepared to become a father again.

When Alex is implicated in an accident involving the female pop star she works for, she and three other women on tour rent a house together in Tuscany. While the tour regroups, confessions are made, secrets are spilled: the guitar tech conceals a forbidden love, the production assistant’s ambition knows no limits, and the personal assistant battles mental issues.

Through arguments and accidents, combating drug use and religion, the women help each other look back on the choices they’ve made, eventually buoying each other, offering up strength to face tough decisions ahead.

Inside the concrete arena, programmed lights whirred and spun in rhythm; eleven thousand fans watched, mesmerized, as vibrant magenta and violet beams sliced through midnight black. On stage, the band regurgitated the same set as the night before, and the night before that. They’d performed the set in Mexico City and Guadalajara. As far south as Santiago and Lima. The road crew for Sadie Estrada’s Home Remedy tour knew each dip in volume, each drop in the beat. They knew exactly, down to the second, how much time it required to step outside and suck down a Marlboro. These time-zone travelers planned bathroom breaks by the songs’ measures; no one missed a cue to mute the stage mics, to hand out room-temp bottled water for set breaks, to pull up house lights.

Behind heavy velvet curtains, separated from the frenzied pace of the show, Alex unscrewed the cover of a moving light to expose the core: circuit boards and capacitors, motors connected to color wheels. Deep bass, feedback, and the fevered pitch of collective voices penetrated the curtain, the familiar, almost comforting reverberations of life on the road. Alex continued her diagnosis, removing the light harness as a mother removes a soiled diaper— routinely, with a touch of tenderness. While she located and replaced the broken part, she kept an ear to the music, alert to the final measure of the set, ready to repack her multi-wheeled toolbox, move on to the next city, set up again.

Alex ran the light through all its functions, testing and retesting once she’d replaced the gobo wheel. The body of the light panned and tilted, working fine. A small victory.

“Sure you know what you’re doing, little lady?” Alex turned at the familiar voice of the tour’s production manager.

“Funny,” she said. “Very original. For that, you get to help me put it away.” Alex waited for another barb, one about her not being able to lift the seventy pounds by herself, but Joe simply helped her flip and crate the unit, a harder task for him at 5’2” than it was for Alex, a good five inches taller.

The arena crackled in anticipation of the show’s climax. Thousands of voices swelled and surged, a unified congregation. The body of the moving light settled into the carved Styrofoam, and Alex tucked its tail inside the handle. As she slammed the case shut, Joe’s laminate got caught inside the box, and he was jerked down by the lanyard around his neck. He freed the latches and yanked it clear, smoothing the wrinkles from the photo of his two young children, a wallet-sized clipping he’d taped behind his backstage pass. Joe caught Alex eyeing the photo.

“When are you gonna give in and pop out a few yourself?” Joe asked.

Alex breathed slowly, letting a brief sadness settle into her body, though her face wore a practiced, blank expression. She gestured into the smothering dark, into the roar of the crowd and sweat-filled air. “And give up all this?” 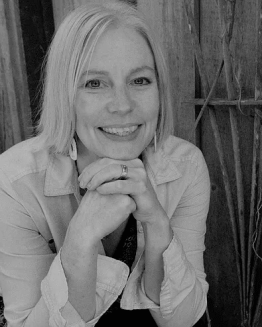 Tavi Black lives on an island near Seattle where she designs sets for the ballet, works as the tour manager for a musical mantra group, and has founded an anti-domestic violence non-profit organization. Before earning an MFA from Lesley University, Tavi spent 14 years touring with rock bands. Several of Tavi’s short stories have been shortlisted for prizes, including Aesthetica Magazine’s Competition, and the Donald Barthelme Prize for Short Prose.

Giveaway: Click the link below for a chance to win a $25 Amazon gift card!