I don’t know what is more enticing, this beautiful cover or the plot? Check out Behind the Veil by E.J. Dawson! 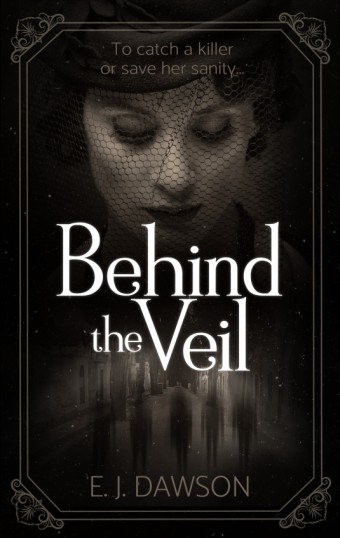 Can she keep the secrets of her past to rescue a girl tormented by a ghost?

In 1920s Los Angeles, Letitia Hawking reads the veil between life and death. A scrying bowl allows her to experience the final moments of the deceased. She brings closure to grief-stricken war widows and mourning families.
For Letitia, it is a penance. She knows no such peace.

For Alasdair Driscoll, it may be the only way to save his niece, Finola, from her growing night terrors. But when Letitia sees a shadowy figure attached to the household, it rouses old fears of her unspeakable past in England.

When a man comes to her about his missing daughter, the third girl to go missing in as many months, Letitia can’t help him when she can’t see who’s taken them.

As a darkness haunts Letitia’s vision, she may not be given a choice in helping the determined Mr Driscoll, or stop herself falling in love with him. But to do so risks a part of herself she locked away, and to release it may cost Letitia her sanity and her heart.

Finola lay in a room better suited to a princess.

A four-poster bed draped in gauze shrouded the figure within. A pale pink duvet covered the slight frame, illuminated by a rose glass lampshade held aloft by a fairy cast in bronze.

Pretty as it was, Letitia focused on the girl in the bed.

Finola’s breathing was labored, her eyes twitching beneath her lids and forehead clammy, with threads of auburn hair sticking to her skin.

Letitia studied her for several moments.

There was no darkness attached to the girl, though the room’s low light gave too many shadows for Letitia’s liking. Ever wary of self-protection, she took hesitant footsteps closer.

When she stood at the foot of the bed, and was sure there were no dark specters here, she took Finola’s measure.

Finola was drugged, but from the girl’s eyes flickering in uneasy sleep it wasn’t working. Even with the morphine, Letitia could tell what the others could not—Finola would still have the nightmares.

A nurse sat beside the bed, and Letitia looked to her, letting a sliver of the nurse’s personality in.

A warm autumn breeze regarded her, refreshing though it was weak. The nurse stared at Letitia but made no comment at Letitia’s scrutiny.

“What’s your name?” Letitia asked, coming around the bed to offer her hand.

“Nurse Hopkins.” Hopkins had curling brown hair and hard dark eyes. A firm hand gripped Letitia’s gloved one, and she maintained eye contact. There was a hardness within the nurse, and Letitia guessed she’d served in the war. Not on the front lines, but she was toughened by her experience.

“What can you tell me about Finola’s condition?” Letitia asked. Mr. Driscoll came up beside her, and Letitia held up a hand to silence him. He glared but nodded permission for Hopkins to speak when the nurse hesitated.

“She has terrible night episodes,” the nurse said, “like those of the soldiers coming back. When she’s awake she cries a lot, she…bathes often but won’t eat much.” The nurse’s glance dipped between Finola and Mrs. Quinn as though she would say more, but she pressed her lips together.

“What else?” Letitia’s gentle tone, and the retreat of Mr. Driscoll’s looming form, let loose the nurse’s tongue.

“I walk with her in the gardens,” she said. “She…doesn’t like people to touch her. Appears distracted and nervous, takes to fright, doesn’t like strange men—the gardeners and delivery men and such.”

It was succinct but what Letitia needed to hear. “Thank you, could you give me a moment?”

The nurse needed another nod from Mr. Driscoll before she took her leave.

“Well?” Mrs. Quinn asked, standing on the far side of the bed, touching her daughter’s forehead. The girl flinched, and Mrs. Quinn drew back her hand with a disappointed frown.

“She’s my daughter and she’s sick.” Mrs. Quinn’s voice held a razor’s edge that hadn’t been there before.

“She also can’t distinguish who is touching her when she’s dreaming,” Letitia said, and Mrs. Quinn covered her widening mouth, gaze darting between Letitia and Finola. She must come do this often, and what should have been the comforting gesture of a mother made the nightmares worse. 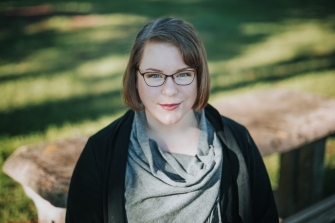 Beginning a writing journey with an epic 21 book series, Ejay started her author career in 2014 and has taken on the ups and downs of self-publishing with her fantasy series The Last Prophecy since 2016. At the start of 2019, she put the series on the backburner to write Behind the Veil in 25 days, and signed a publishing contract for the gothic noir novel to independent publisher Literary Wanderlust. Behind the Veil is set for release on the October 1st 2021. She resumed self-publishing a scifi series, Queen of Spades released across 2020 and 2021, as well as signing another contract with Literary Wanderlust for NA fantasy, Echo of the Evercry. Believing in more than one path to a career in publishing, Ejay pursues self-publishing alongside querying traditional publishers with multiple manuscripts.

Ejay writes scifi, fantasy, and horror, with a dash of the paranormal. Behind the Veil is her first book with Literary Wanderlust, a romantic suspense with a touch of darkness. She also has a fantasy NA with Literary, Echo of the Evercry, and two self published series.