Welcome to the book tour for Sally’s Magic River by H. Frank Gaetner. Read on for more info! 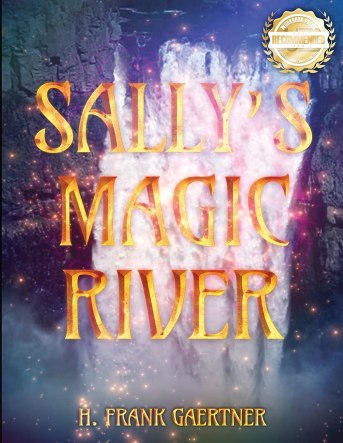 Sally and the Magic River is a magical story of a young girl’s triumph over extreme adversity. Its various scenes are meant to evoke powerful, mental images with parallels to movies such as “The Wizard of Oz”, “Peter Pan”, “The River Wild” and “Gravity”.

It’s fascinating how one’s tragedy can turn into a defining moment. A single misfortune can fuel your desire to be better and ignites your vision. This is what Sally experienced. THIS IS WHAT WE NEED TO EXPERIENCE.

The Hyundai Elantra looked like it had been in a demolition derby. Its jacked-up, deranged occupants had just robbed a Canejo Valley liquor store. The store’s burglar alarm brought cops to the scene in time to see the getaway vehicle disappear into a nearby residential area. A cacophony of bullhorns, racing engines and squealing tires pursued the menace through a crosshatched neighborhood of caromed parked cars, flattened hedges and trenched yards. The police were about to trap the intruder when it bolted onto Lynn Road and headed west toward the Ventura-Freeway and an off-ramp crowded with biotechnologists on their workday morning commute from Agoura Hills and Westlake Village. And it’s here, at this exit, where fate decided to have its way. Determined to escape, the disaster on wheels took the only way out, the wrong way.

Meanwhile, a mother and her ten-year-old daughter were traveling north from their home in Beverly Hills. The girl sat straining forward in the front seat of her family’s classic Fleetwood-Brougham Cadillac anxiously anticipating a visit with her grandfather, a citrus rancher

in the Santa Clara River Valley. Dad was away on business, so the two “women of the house” were on their own. The ten-year old was very fond of her grandfather, and enjoyed helping him in his workshop where he now spent most of his day making beautiful mahogany and ash C1 racing canoes. Such special moments with her grandfather and the solitude of the groves were the main things, but there was also one other thing, the enchanting and unpredictable Santa Clara River with its flood-plain sanctuary of rabbits, squirrels, coyotes, crows, and geese.

The mother knew her precocious daughter was more than ready to arrive at their intended destination. The child’s upturned nose, imp-like smile, and bright green eyes made her look like a pixie imitating a race horse waiting for its starting gate to open. Earlier that morning she had wasted no time. She inhaled her breakfast, set her auburn hair in pigtails, and threw on a red checkered shirt, overalls, and hiking boots to certify that she was ready to “work” on the ranch as soon as they arrived. So, as fate would have it, the two travelers were buckled into the family’s mega Cadillac by 7:30 am, and by 8:10 were entering that portion of the Ventura Freeway that passes through the city of Thousand Oaks.

Already scarred and now re-scarred by numerous glancing blows from its previous neighborhood chase and its reckless game of chicken up the off-ramp, the erratically driven wreck shot onto the freeway directly into the path of oncoming commuter traffic. Gaining speed to over ninety miles per hour, the motorists’ worst nightmare crossed four lanes of traffic and, since miracles do happen, managed to reach the emergency shoulder adjoining the center divider. Seconds later, threading its way between oncoming traffic and the center divider, it successfully arrived at the freeway’s next exit, the Moorpark Road underpass. But with its luck running out, “success” was to be short lived. As the Elantra crossed the underpass, a Toyota Celica, which had been attempting to avoid a rear end collision with the car ahead of it, spun out of control, only to be rear-ended itself by an eighteen- wheel Freightliner. The Toyota, partially airborne from the impact, continued its amazing thrill ride up and over the freeway guard-rail to the street below, where, in a Gallagher fantasy of gigantic proportions, it landed upright on a flatbed truck of watermelons where it began to head east, its new, unscheduled, direction. From Lynn Road to Moorpark Road, motorists, many in cars totaled from multiple collisions, sat unharmed. One would think every one of these fortunate, uninjured travelers would be giving thanks, simply grateful to be alive, but a few were way too busy fumbling with their dash-board mounted GoPro™ cameras to be so distracted.

At the same time the impacted big-rig, twisting violently, suddenly jackknifed across two lanes of traffic in a cloud of burning rubber and smoking brakes. With effective reaction times reduced to fractional seconds, a new group of hapless drivers began to form a chain of smashed fenders, damaged egos, and whiplash-injury lawsuits as Mercedes after BMW, after Jaguar found its mark on the luxury car of the wealthy biotechnology employee ahead of it.

The Elantra, having navigated four lanes of oncoming and a mile of narrow, center-divider emergency-lane, suddenly came into the Cadillac’s view. And then, just as suddenly, it reacted to the out-of-control semi by hard- glancing the concrete retaining wall to meet head-on the Cadillac and its ranch-bound human cargo. The heavyweight car propelled itself forward, merging the Elantra’s engine with front and rear seats and redirecting the motion of the compacted mass in the opposite, but now right, direction down the freeway. The collision launched both mother and daughter forward as if the two had been shot from guns. But, before their seat belts could carry the full burden of forward motion, the vintage Cadillac’s newly retrofitted airbags exploded from their housings directly into the path of the would-be human projectiles. Traffic in both directions came to a complete stop as flying pieces of metal and glass made their way back to earth.

A surreal silence followed the mayhem. For some, the silence was interrupted by an appropriate heart-pounding, adrenaline-inflicted, involuntary, flight-response. For one, the silence momentarily intensified into a darkness more complete than any found in the deepest cavern.

I am a retired molecular genetics scientist who has authored and co-authored well over 50 patents and academic publications. Sally’s Magic River is my only work of fiction. I wrote the story over twenty years ago and first published it as Sally and the Magic River in 2014. I am republishing the story in this new format with its new cover and title, Sally’s Magic River. Why? Because I think Sally’s story may turn out to be the most important thing I’ve written.

B is for Book Review (Spotlight) https://bforbookreview.wordpress.com

The Magic of Wor(l)ds (Spotlight) http://themagicofworlds.wordpress.com