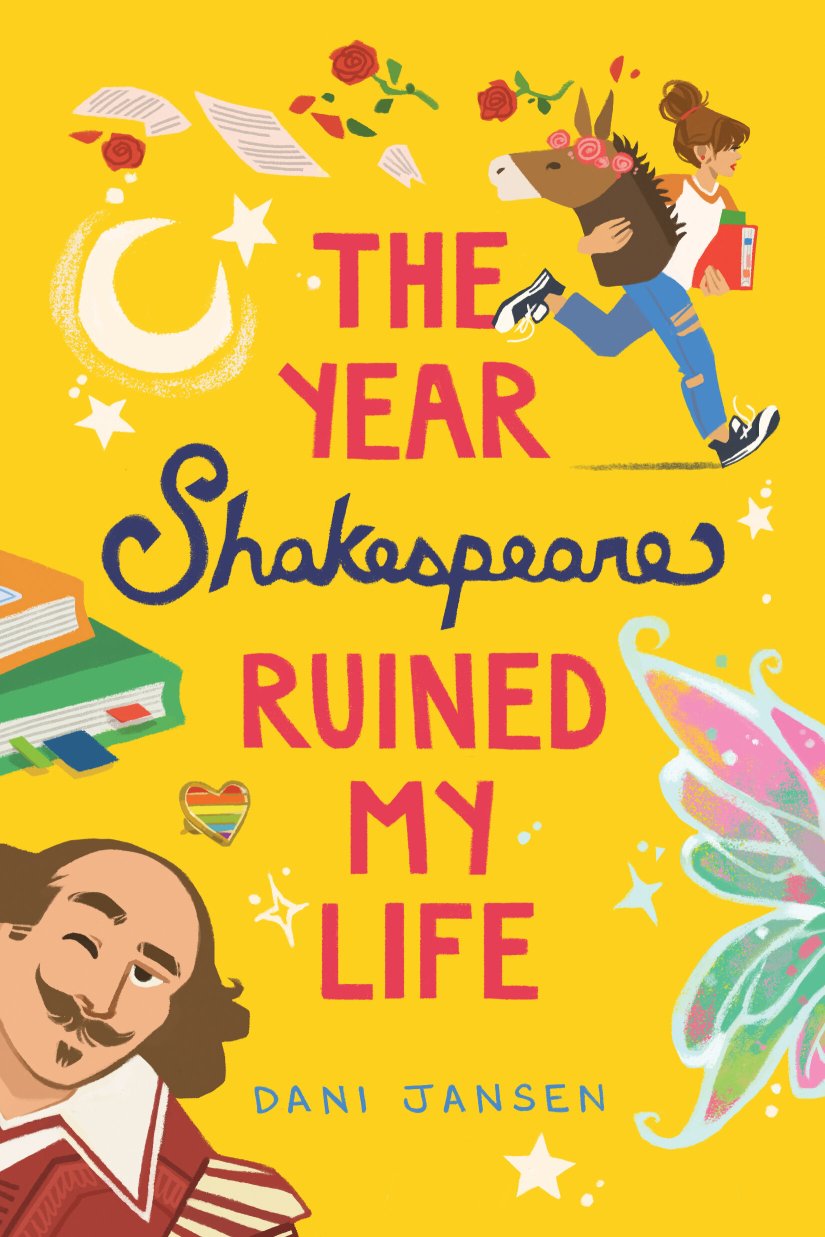 Alison Green, desperate valedictorian-wannabe, agrees to produce her school’s production of A Midsummer Night’s Dream. That’s her first big mistake. The second is accidentally saying Yes to a date with her oldest friend, Jack, even though she’s crushing on Charlotte. Alison manages to stay positive, even when her best friend starts referring to the play as “Ye Olde Shakespearean Disaster.” Alison must cope with the misadventures that befall the play if she’s going to survive the year. She’ll also have to grapple with what it means to be “out” and what she might be willing to give up for love.

Alison manages to stay positive, even when her best friend starts referring to the play as “Ye Olde Shakespearean Disaster.” Alison must cope with the misadventures that befall the play if she’s going to survive the year. She’ll also have to grapple with what it means to be “out” and what she might be willing to give up for love. 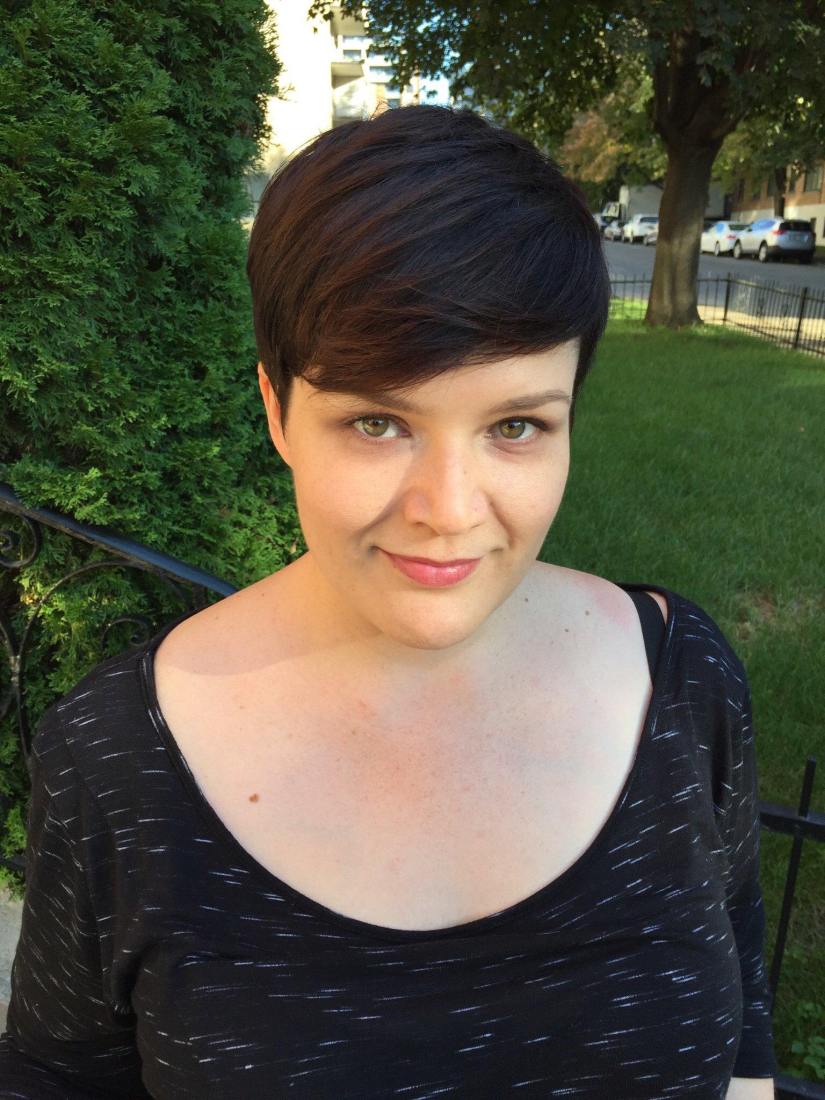 Dani Jansen is a teacher and writer who lives in Montreal. She should probably be embarrassed to admit that she has performed as part of her school’s Glee Club for eight years. She should probably also be ashamed to tell people that she named her cats after punctuation symbols (Ampersand and Em-Dash, in case you’re curious).

I am a recovering theatre kid so this book spoke to me on so many levels. I have been involved in shows where things can go wrong, as an extra I once stood on an actor’s stomach and thought I’d injured her badly (Romeo & Juliet 70s punk style, she was on the floor and I had to jump off a box and she wasn’t supposed to be there, then I fell off the stage and almost landed on the mayor!), then there was the year our leading man got stoned on opening night and couldn’t remember his lines in front of the headmaster, mayor and other local notables – as stage manager I had to stop our director/drama teacher from killing him during the interval. Basically I’ve seen a lot of drama on stage and off.

So I empathised massively with Alison, producing her school’s Midsummer Night’s Dream, when an actor quits, her costume designer has a relationship malfunction and she gets threatened by the theatre mafia!

This book was a total hoot, I was laughing out loud at times (cue some strange looks from my very own Mr Shakespeare, my husband (yes that is our last name)) and cheering Alison on as she went on a date with the hot girl of her dreams (and corgi lover), Charlotte.

I highly recommend this book to any theatre kids out there, or anyone who loves funny, entertaining books with heart.

I don’t post about this often but it’s been on my mind recently and it’s weighing me down.

I love the theatre and I love ballet, have done since I was tiny (expelled from ballet lessons aged 7 for wanting to do ‘real dancing’ not endless good toes, bad toes, expelled from drama class at 13 for being “too dramatic” – I kid you not).

But since meeting the Mr a serious question has arisen – why are so many arts spaces hostile to the disabled?

My Mr broke his back aged 21 falling from a window at a party, he had extensive spinal surgery and rehab, he now uses a wheelchair to get around as he is paralysed from the waist down (yes he can still have sex before you ask, no I won’t explain in detail).

He wasn’t a massive theatre goer before we got together 6 years ago, he’d been to a few musicals and some live comedy. I took him to his first festival, first Shakespeare play and first ballet.

Some arts venues are brilliant, super accommodating and helpful (the Lyric Hammersmith, whatever the Hammersmith Apollo is now called, the O2, and a few West End theatres can’t do enough), others are a bit of a pain (Barbican, with its annoying registration process for example) and others are just downright obstructive.

We went to Sadler’s Wells a few years ago to see Matthew Bourne’s Gothic Sleeping Beauty, he’s my favourite choreographer, and I was delighted. The Mr booked the tickets and while they were a bit useless about it, we did get sorted in the end.

Christmas 2014 – Bourne’s Edward Scissorhands is at Sadler’s Wells. I want to go, the Mr says he’ll book, a Christmas present.

We don’t go, because SW have decided people lie about needing a wheelchair space and they want proof – a very particular proof, that even Government agencies don’t ask for, before they’ll make any booking.

We complain, it’s a really obnoxious policy and the access manager isn’t much better. We can’t find the document they want, and no other, even a note from his GP will do.

Who lies about needing a wheelchair space? They’ll look incredibly stupid when they turn up and have to stand, as chairs are removed to make room. You just refuse them then or ask them to pay the full value, or whatever.

It’s a policy I’ve never come across before or since. But it basically says “ballet is not for you” to anyone ringing up.

Ballet gets a lot of stick for being elitist, something many companies and venues are trying to change so to have the dance venue in London behave like this is extraordinary.

This Christmas just gone Sleeping Beauty was back, we didn’t even discuss going, we saw Bill Bailey in the West End instead (he was brilliant and the theatre’s assistance excellence) but I did ring Sadler’s Wells and they still have this mad policy in place. Way to tell disabled dance fans you don’t want them cluttering up your audience.

Took my boyfriend to the theatre tonight for his birthday. We went to see The Book of Mormon. 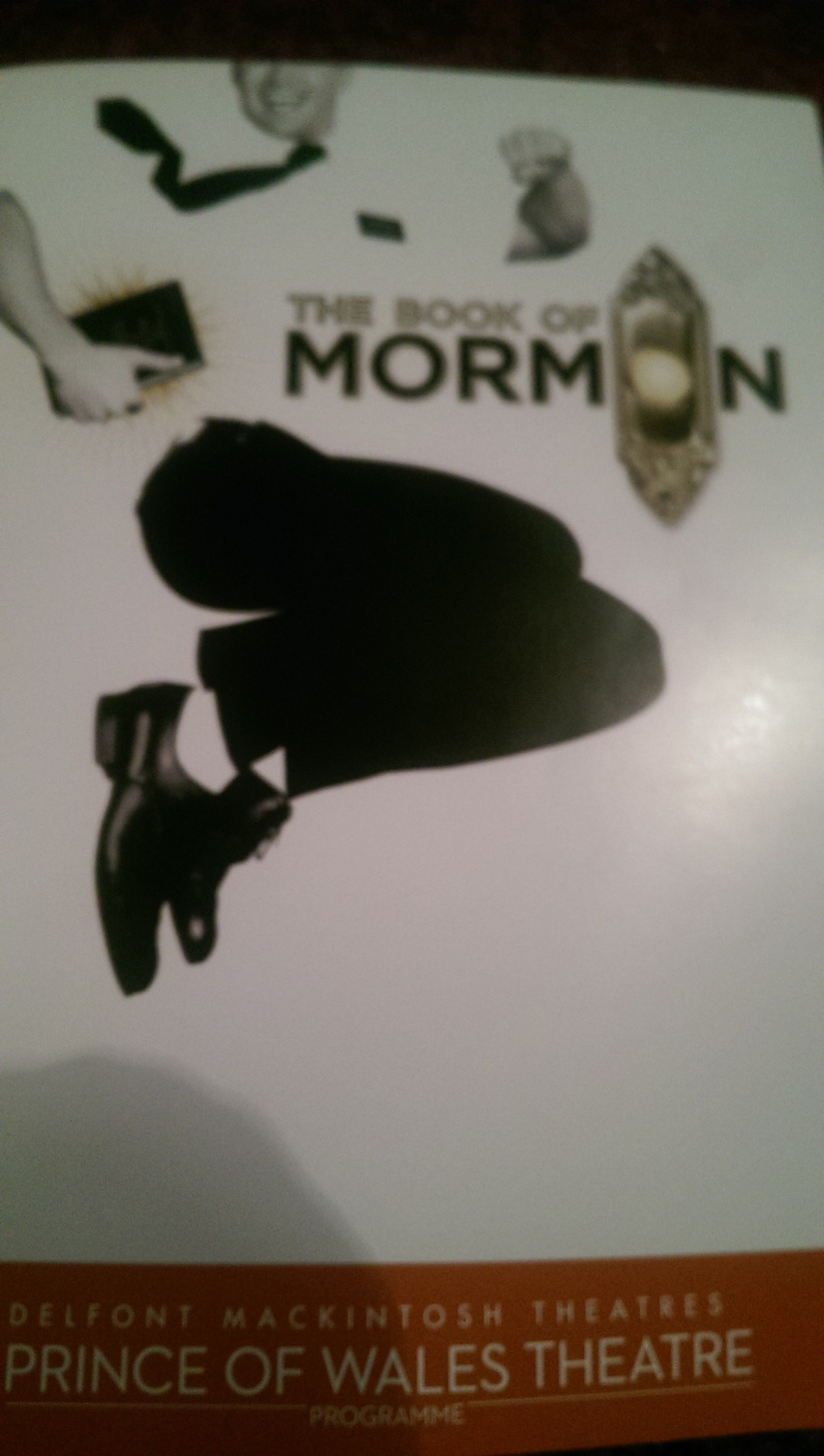 We saw Avenue Q a few years ago, and this is by the same team (who also wrote South Park – which I can’t stand).

BoM is very, very funny but not for anyone who doesn’t like swearing, or sexual references. Basically, if you’re easily offended, skip this and see something else (Les Mis, Cats, Phantom, all good).

The story is that of two Mormon missionaries from Utah who are dispatched to northern Uganda for their two year mission – to convert and baptize the natives.

A lot of the jokes revolve around the fish out of water scenario these 19 year olds find themselves in. However, others are very crude and based on American stereotypes of Africans. There are jokes about Aids, poverty, FGM (I didn’t find these funny), warlords, rape (again, not so funny) and dysentery.

Fans of South Park will know this crudity, and find it amusing, and while I laughed at some of the jokes, others really grated. South Park has never been something I would choose to watch, I really don’t think it’s funny or clever.

I think it depends on your comedic taste and level of sensitivity to near-knuckle humour, as to whether this show would be for you.

The man sat in front of me laughed so hard at times, I was a bit concerned as he was bright red. 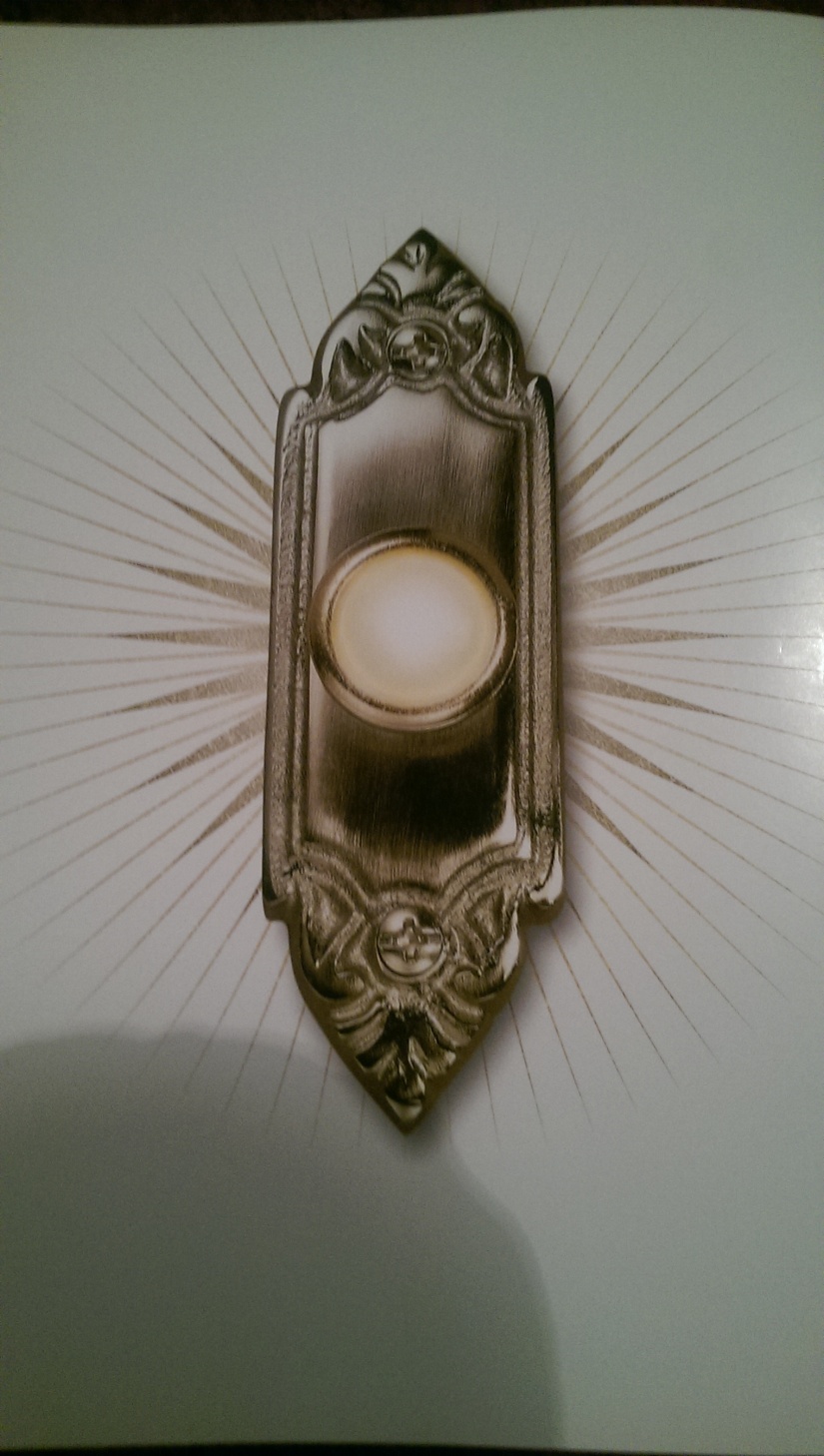 One of my greatest loves in life is the theatre, I wanted to be an actress but have crippling stage fright so I have to settle for a seat in the audience.

Last night we went to the Lyric theatre in Hammersmith to see their fabulous production of Alan Parker’s Bugsy Malone. 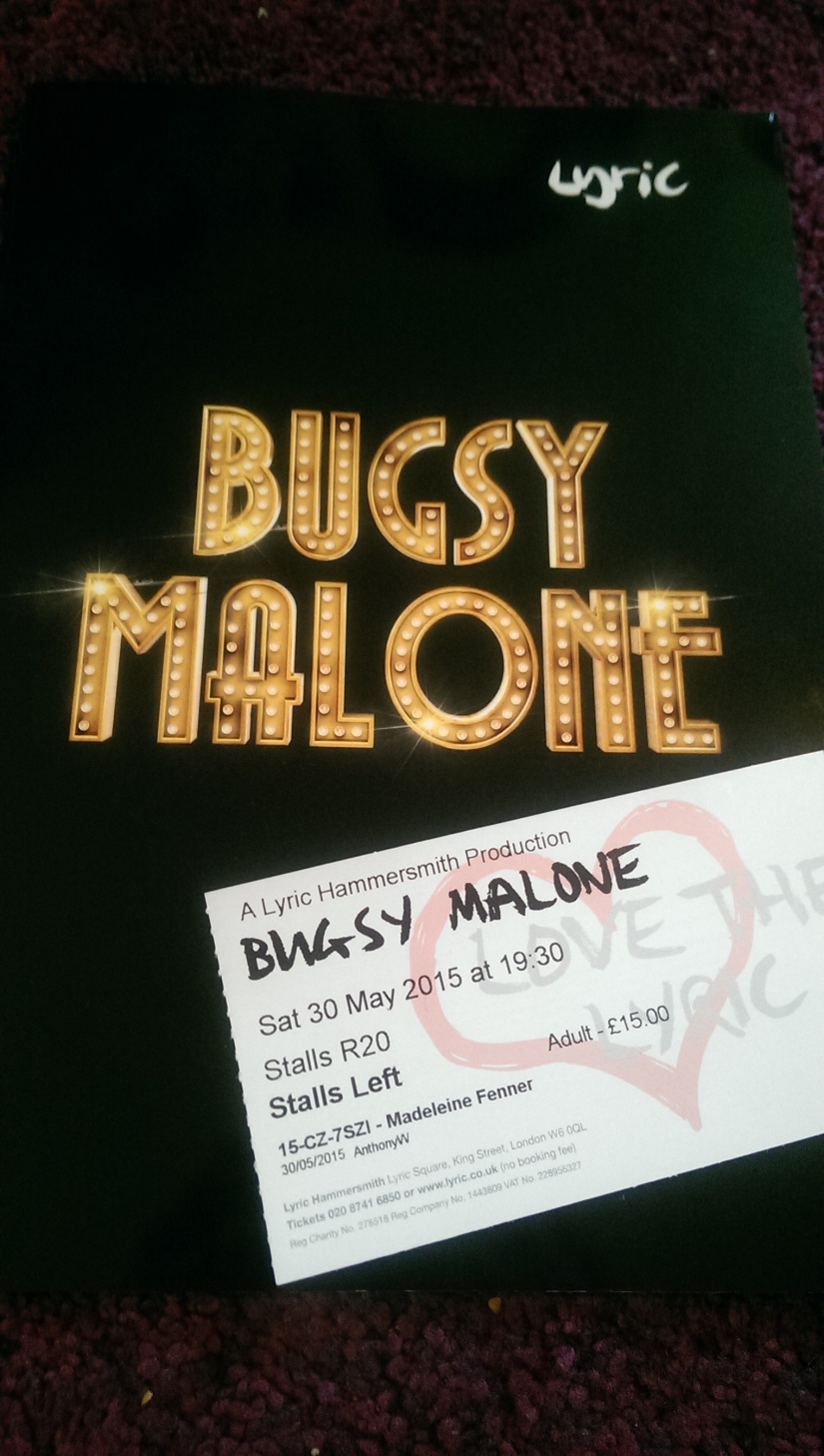 Previously thought to be un-stageable, the Lyric’s talented director Sean Hughes and his cast of future megastars proved that completely wrong.

As in the film that introduced Jodie Foster to the world, all the roles are played by child actors, and let me tell you, I highly expect these insanely talented kids to go far.

From their breathtaking dance routines, to the (mostly) flawless American accents, to the beautiful singing voices (the girl playing Blousey Brown stood out in particular) and the brilliant comic asides from Fat Sam himself, this was one hell of a show and they deserved every second of the standing ovation.

I wasn’t applauding because ‘Aww look at how cute they are’, I was applauding incredible talent, which comes in all shapes and sizes(and ages).

Yes, most of them attend drama classes or stage school (as I did for a bit) but so do dozens of other young performers, and sadly some of them will never stand on a professional stage.

So hats off to the cast of Bugsy, and if you’re in or near London, go, it’s a great theatre, a fantastic show, and the tickets are £15. What more could you want?