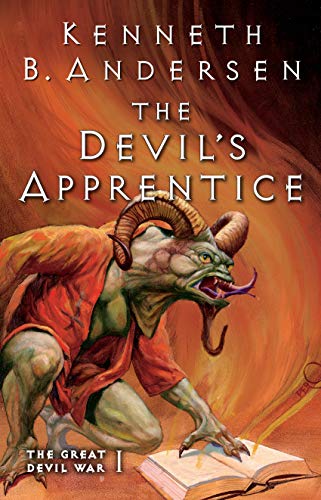 Philip is a good boy, a really good boy, who accidentally gets sent to Hell to become the Devil’s heir. The Devil, Lucifer, is dying and desperately in need of a successor, but there’s been a mistake and Philip is the wrong boy.

Lucifer has no other choice than to begin the difficult task of training Philip in the ways of evil. Philip is terrible at being bad, but when he falls in love with the she-devil Satina and experiences the powerful forces of love and jealousy, the task becomes much easier.

Philip finds both friends and enemies in this odd, gloomy underworld–but who can he trust, when he discovers an evil-minded plot against the dark throne?

The Great Devil War is a gripping and humorous tale about good and evil seen from a different perspective, making the reader laugh and think. It’s filled with biblical and historical characters and set in a world beyond your wildest dreams. Or nightmares …

This was a fun read, although the concept isn’t entirely new, it’s well executed and features a talking cat (always a good thing). First in a four book series, featuring some characters you may have heard of.

Philip as a character got a bit annoying at the beginning, he’s a bit pathetic but he improves as the plot goes along and he discovers he isn’t as useless as he thought he was.

I hadn’t heard of the Danish author before reading this, and I’m quite impressed with his world building and the humorous moments he works into the narrative.

If you are looking for a new fantasy series, this is worth a read, and there’s a talking cat (did I mention that already!?!)

*In exchange for taking part in this blog tour I was kindly gifted a copy of this book but all opinions remain my own.