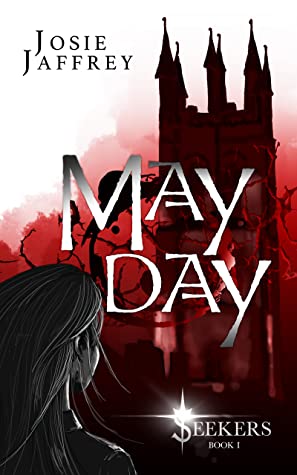 If the murderer you’re tracking is a vampire, then you want a vampire detective. Just maybe not this one.It’s not that Jack Valentine is bad at her job. The youngest member of Oxford’s Seekers has an impressive track record, but she also has an impressive grudge against the local baron, Killian Drake.

When a human turns up dead on May Morning, she’s determined to pin the murder on Drake. The problem is that none of the evidence points to him. Instead, it leads Jack into a web of conspiracy involving the most powerful people in the country, people to whom Jack has no access. But she knows someone who does.

To get to the truth, Jack will have to partner up with her worst enemy. As long as she can keep her cool, Drake will point her to the ringleaders, she’ll find the murderer and no one else will have to die.
Body bags on standby.

May Day is the first book in Josie Jaffrey’s Seekers series, an urban fantasy series set in Oxford, England.
Goodreads

This was a good slice of crime noir, with added fangs. Vampire detectives investigating crimes potentially committed by their own crime, finding all kinds of creeps lurking in the shadows along the way.

Keeping their bloodthirsty secrets safe from the human population and making sure not too many bloodless corpses turn up is a full time job, so the last thing they need is a weird murder.

These vamps seem to be Daywalkers, blending in amongst the students and locals of Oxford as they carry out their investigation, problem is it all seems to loop back round to the people they least want to be guilty.

Riddled with pitch black humour, pop culture references and a healthy dose of old fashioned British irreverence, this is an excellent new addition to the vampire literary canon.